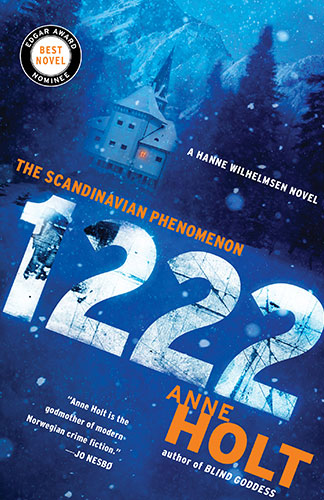 Author: Anne Holt
Publisher: Allen and Unwin
Copyright Year: 2011
ISBN: 978-1-84887-608-8
No of Pages: 313
Review By: Vikki Petraitis
Book Synopsis:
A train crashes in the mountains during one of the worst snow storms in Norwegian history, trapping a couple of hundred survivors in a hotel 1222 metres above sea level. One of the passengers is Henne Wilhelmsen – an ex-cop who retired years earlier after been shot in the spine and confined to a wheelchair. She has made an art form out of her melancholic existence – avoiding people and keeping to herself. Trapped as they are in the snow-bound hotel, Hanne is forced out of retirement when the body of a flamboyant priest is found with a gunshot wound to the head. His death is quickly followed by that of another priest who had something to tell Hanne, but he never got around to it. Added to the murders is the mystery of a sealed carriage on the train that held a passenger so heavily guarded that everyone believes it must be a member of the royal family. Hanne knows better and suspects something most sinister.

Not being a fan of the cranky-pants male detective with the weigh of the world on his shoulders, Henne Wilhelmsen is the female version, but way more likable because you sense her coming redemption; like the hurricane ice around her, Hanne melts as the storm abates, and the cop instincts, suppressed since her spinal injury, come to the fore; she finds her soul in the investigation as her mind is once again stretched with sorting clues and reading people.

Like many readers in today’s busy world, a book needs to grab me straight away or else I tend to toss it aside and reach for the next one on the pile. 1222 certainly did that. It was fast-paced right from the beginning, and the quirky cast of characters kept me interested. In some way, this story is a body-in-the-library type puzzle because the list of suspects is confined to those staying in the hotel. Nonetheless, there is an air of menace until the cavalry arrive by helicopter and allow Hanne to do a classic Poirot reveal at the end.