A force to be reckoned with in Australian bookselling 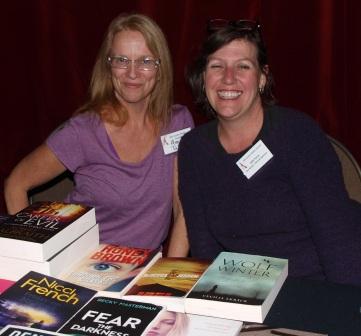 Deb wasn’t able to be at Sisters in Crime’s last event but we entrusted a bottle of champagne and a stiletto champagne stopper to her colleague Serena Gall – though whether or not a stopper was needed under such circumstances is debatable. It was a cause for great celebration.

Deb opened the Sun Bookshop in Yarraville in Melbourne’s West in 1998, then the Younger Sun opposite in 2009. She first discovered Sisters in Crime in 1994, before her bookselling days, when Sara Paretsky came to Australia.

Deb says discovering Sisters in Crime has been great. She long coveting the job of bookseller to Sisters in Crime before those fabulous folk from Benn’s Books decided to give it away. (It could it have been the stairs, she notes.)

“The dream came true. Not only do I sell the books but I get to listen to all of those great female crime writers, and get to know the fantastic group that comprises the Sisters in Crime,” she told Sisters in Crime.

“Being named ABA Bookseller of the Year has been a great honour. My fab staff nominated me and the award is voted on from within the industry. Thanks for the champagne Sisters, you are all the best. Here’s to more great events and lots of reading.”

Deb gets to put her encyclopaedic knowledge of women’s crime writing into action by being a judge of the Davitt Awards for Best Crime Books. May the force be with her!