A Great Reckoning by Louise Penny 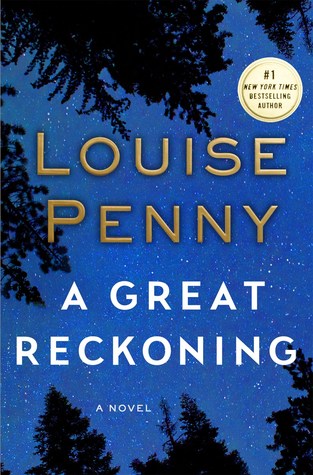 Former Chief Inspector Gamache has been hunting killers his entire career and as the new commander of the Sûreté Academy, he is given the chance to combat the corruption and brutality that has been rife throughout the force.  But when a former colleague and professor of the Academy is found murdered, with a mysterious map of Three Pines in his possession, Gamache has an even tougher task ahead of him.

When suspicion turns to Gamache himself, and his possible involvement in the crime, the search for the answers takes the investigation to the village of Three Pines, where a series of shattering secrets is poised to be revealed…

When Armand Gamache takes over the role of Commander of the Sûreté Academy, he is aware that he will have to battle the prevailing, entrenched culture of violence and corruption – created and encouraged by inept and corrupt professors.

In his time with the Sûreté, he had succeeded in reshaping the attitudes and behaviours of those working within his sphere of influence. However, he has always known that attitudes and behaviours are shaped at the Academy, the last bastion of resistance to change within the organisation.  He appointed Jean-Guy Beauvoir, his son-in-law as his Deputy but the other choices he makes in relation to who remains and who goes causes others to question his reasoning.

Not only does he keep on Professor Serge Leduc, who is known to be corrupt, but he also approaches Michel Brébeuf, a sworn enemy and the man who almost killed him, to join the teaching staff.  Gamache is intent on changing the culture at the Academy and expects some resistance but not to the extent that even some of the most promising students appear to resist the changes he is trying to make and call him weak.  He also accepts applications from some students that have already been rejected, again causing some to question his motives.

However, when Professor Leduc is found murdered in his living quarters, Gamache finds out that Leduc ignored the directive banning personal possession of firearms, as the weapon that killed Leduc was his own.   It was also revealed that Leduc had regular meetings in his rooms with a small, select group of handpicked students. However, the extent of the corruption at the Academy is revealed when the reason that Leduc was meeting in secret with the students and what was occurring at those meetings was revealed during the investigation.  Both Gamache and Brébeuf then become suspects in the murder.

This is Louise Penny at her best.  There are twists and turns that will keep the reader guessing until the end.  It is a very well crafted novel, full of tension and suspense.  Every word is essential to the plot and to the final solution – one that will surprise.