“A gun has only one answer.” Q&A with Candice Fox 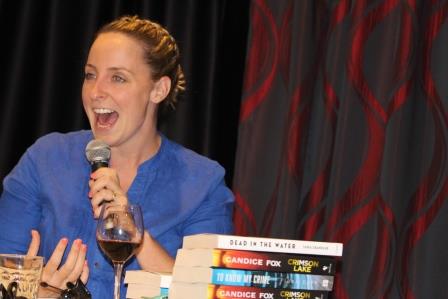 Hi Candice. Thanks for taking our questions.

“A gun has only one answer.” That’s what your narrator, Ted, tells us in the first paragraph of Crimson Lake. The only company he’s had for a month is his gun, and he’s reduced to drinking Wild Turkey and asking the gun questions. How did you go about creating this character, with this voice, at this low point in his life?

I think perhaps it was easy to be Ted at rock bottom because I’ve been there – well, my version of it anyway. The break-up of my first marriage was unexpected and devastating. I’d had a very chic apartment in Brisbane and a very admirable job. Friends and a life. Then, 24 hours after it happened, I was on the road and all I had to my name was $400, my clothes in the back of my car, and my cat. I drank plenty of cheap wine to get over it. I think at times like that, you realise what you really need, and at this time what Ted really needed but didn’t have was a friend – and one shows up within a few pages.

Ted goes to a local diner to find a woman he’s been told runs a PI agency. He spots “a lady reading a crime fiction novel, grey wisps creeping from her temples into her orange curls”, and thinks this must be her. As the author, you’re having a little smile at traditional crime stories and the biggest demographic buying crime fiction?

Perhaps subconsciously! I guess of the two Ted leaned toward someone older, someone with more experience, someone reserved. It’s more Amanda’s [the PI’s] weird appearance that pushes him toward the woman with the orange curls.

The PI, Amanda, turns out to be an “anaemic-looking tattooed butterfly” who converses in rhyme: “You’re going to have to be incognito, you understand? Like a mosquito in a burrito.” What went into your invention of this extraordinary character?

The thing that I was trying to do with Amanda was toy with a character who has difficulty expressing empathy in a new and different way. The Lisbeth Salanders of the fiction world explore this sort of thing through aggression, so I wanted to create someone who isn’t aggressive necessarily, but just doesn’t have any decorum. Any sense of appropriate behaviour. Most of the time Amanda is just amusing herself, and one of the ways she does that is by cracking jokes when there’s no indication whatsoever that people find them/her funny. She finds herself funny, and that’s the central point of her rhyming games.

Amanda is working the case of a missing author of a cross-genre series (Bible stories popularised for YA readers, with post-apocalyptic settings, zombies, vampires, werewolves, witches, “all the badass sex and violence young people love”). Could you enjoy writing that kind of thing?

I think it’d be awesome to write something post-apocalyptic, I really do. Most of my work looks at people when they reveal themselves as predators, and I think the end of the world is a time when ordinary people are forced to do that to survive. The problem with this idea (Jake’s idea) would be all the bible stuff. I don’t find any of that compelling, but it made for a good side-clue that he might have been murdered because he pissed off some religious nuts.

I remember how, when you spoke about Crimson Lake at a Sisters in Crime event, you described feeling protected when you were in a Queensland house surrounded by fast-growing tropical vegetation. The missing author case has some startling elements. A huge crocodile is just the first. Did you allow the environment and people of Far North Queensland to suggest your plot?

To a certain degree, yes. I set the book in the tropical north because I needed Ted to run somewhere, and it’s certainly where I’d run if I was in that kind of trouble. It’s a wild place, a place of contrasting ancient prehistoric life and newness and constant growth, so it seemed like a safe bet. Ted might have been able to imagine his sins being covered up there by the disinterest or self-interest of the inhabitants, or metaphorically by the tangled vines and rainforest.

Alongside the missing author investigation by Amanda and Ted, you have Amanda and Ted surreptitiously probing each other’s backstories and other characters investigating too. That’s a lot of story arcs. How did you manage your novel’s construction and pacing?

I think you can have as many story arcs as you like if you handle them with care. The success of Game of Thrones with its cast of thousands will tell you that. The key for me was making sure that at no time was anyone confused about where Ted was or what he was looking at. So, no multiple first-person prose with different voices, except where the other voice is clearly delineated as a letter, separate in font and structure from the original text. Pacing is just a matter of giving the reader something to push them through the chapters without shoving them against their will with exhausting stuff like action scenes or violence. A little breadcrumb here. Another little breadcrumb of a different flavour there. That sort of thing.

Ted is a big, good-looking man who knows how to fight. Fabiana, the reporter who arrives from Sydney to stalk Ted, is another good-looking character and a potential love interest. Do you write with possible movie scripts, TV series and actors in mind?

Ted and Fabiana are the only distinctly good looking people in the book, and they are that way deliberately. Amanda is described as junkie-like and “anaemic”, the Crimson Lake cops are “porkers” and Val Gratteur is “withered” and “ancient”. Ted had to be relatively handsome because I was playing with the notion that the media constructs child sex offenders as physically ugly people so that we all feel safe and confident in detecting them. As a culture, we assume incorrectly that a person won’t offend against children if they’re good looking – they can get all the sex they need, right? Fabiana is good looking because she’s a journalist, and a part of that is her ridiculous means of getting what she wants with those looks – tottering around on rocky clay roads in high heels. You have to note also that the only time we see Fabiana described is through Ted’s eyes, and he’s attracted to her. She might not be everyone’s type.

So the short answer is that no, I certainly don’t write with movie or TV scripts in mind. I have a great career as a book writer, something I worked at for more than a decade before finding any success – I don’t need the writing to suffer artistically to pursue another financial sideline.

The Epilogue is told from Amanda’s point of view. I understand you’re writing a sequel to Crimson Lake. Any chance more of the story-telling will be taken on by Amanda?

Yes, I wanted to free myself up to separate Ted and Amanda physically in the following novels and have the reader still know what she’s up to in Ted’s absence. And it was more sensible to stay away from Amanda’s perspective until after she’d revealed her secret. A lot of the way Amanda thinks and behaves is a result of what happened to her on the mountaintop, and that was only something that could come out at the end of the novel.

Are there any more things you’d like to say to us about Crimson Lake?