A is for Arsenic – Kathyrn Harkup 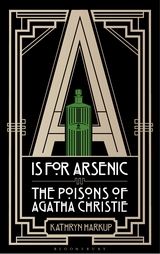 Agatha Christie’s detailed plotting is what makes her books so compelling. Christie used poison to kill her characters more often than any other murder method, with the poison itself being a central part of the novel, and her choice of deadly substances was far from random; the chemical and physiological characteristics of each poison provide vital clues to discovery of the murderer. With gunshots or stabbings the cause of death is obvious, but not so with poisons. How is it that some compounds prove so deadly, and in such tiny amounts?

Ok, so you’ve done the hard yards, done the science degree and then the PhD, and after postdoctoral research, you’ve decided to—‘be a freelance science communicator delivering talks and workshops on the quirky side of science’?  That’s exactly what author Dr Kathryn Harkup has done.  Forsaking ‘…hours slaving over a hot fume-hood’, Harkup has written a book not only incorporating her love of science, but her love of Agatha Christie.  One would think, wow, an entire alphabet of poison, which I’m sure Harkup could produce, but there’s a few letters missing (ending up with ‘V’ for Veronal), offering only 14 of the poisons Christie used in her books.

Beginning the book is a short history of the professional life of Christie, a nurse during WWI, who volunteered for further training to become an apothecary’s assistant.  In order to pass the Apothecaries Hall exam, Christie was schooled in the ‘…practical, as well as theoretical, aspects of chemistry and pharmacy….’  During WWII, Christie again volunteered as a dispenser.  Her expertise was ‘…kept up to date with new developments in drug and pharmaceutical practice…’ through her work at University College Hospital in London.  What a great foundation of chemical knowledge for the future author to use in her books.  All this background on Christie was interesting, if, like me, you had no idea Christie was a credible chemist.

Each chapter, which represents one poison, has the same structural format.  There’s a history of the drug; the contemporary development of its properties and chemical analysis of the drug; how the drug kills; and real life cases.  And all is peppered with humorous asides.  Then Harkup rounds each chapter off with how the drug was used by Christie in her novel(s).  It’s good that Harkup used this format fairly consistently because, not being a science person who is into the chemical structure and analysis of the drug, I could skip to the bits I wanted to read.

There’s an Appendix 1 which lists a table of all Christie’s books and the method of murder used, as well as an Appendix 2 which lays out the structures of some of the chemicals described in the book.  You can guess which Appendix I read!

I was impressed with Harkup’s knowledge, with her ability to engage me with some of her chemical analyses, and with her wit.  I appreciated the way the book was formatted.  If you’re interested in factual information about Agatha Christie’s use of poisons, and how she used them in her books, you have struck gold with “A is for Arsenic”.