A Morbid Habit by Annie Hauxwell 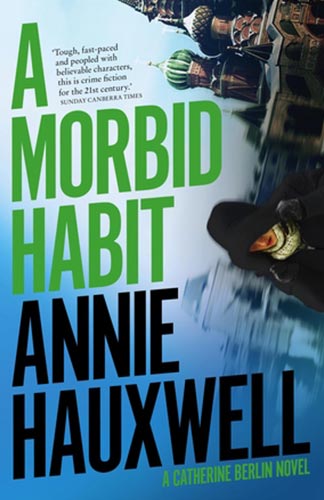 Author: Annie Hauxwell
Publisher: Penguin/Michael Joseph
Copyright Year: 2014
ISBN: 0434022969
Review By: Angela Savage
Book Synopsis: A Morbid Habit is the third novel in Annie Hauxwell’s Catherine Berlin series and to my mind, it’s her best yet. Set mostly in Russia, A Morbid Habit is as bleak and dark as a Moscow winter. The plot is satisfyingly complex, the suspense razor sharp, and the characters intriguing, if rarely likeable.

Even Berlin herself is more intriguing than likeable, a woman who has maintained a career as a financial regulation investigator alongside a heroin habit for decades. In 2012’s In Her Blood, she was accessing daily medicinal doses of heroin. In A Morbid Habit, she’s been reduced to taking buprenorphine, an opioid replacement. She reflects that ‘[a]t the age of fifty-seven, she sometimes felt that she was a living embodiment of the history of drug policy.’

A Morbid Habit opens four days before Christmas. Berlin is monitoring warehouses owned by a British company that provides ‘international security solutions’, when she witnesses unscheduled activity . The supervisor, Fagan, asks her to turn a blind eye to what he describes as ‘just a couple of casuals, like you, knocking off surplus stock to flog down the market’ to help them through the festive season. But Berlin doesn’t buy the story: the men she saw were not taking stuff out of the warehouse, they were putting stuff in.

The action moves from London to Moscow, where Major Utkin of the Moscow Criminal Investigation Department, is trying to prevent ‘smoking, ball-scratching dullards’ from trampling his crime scene, an alley where a well-dressed, middle-aged Russian man has been found strangled. In the scene that follows, another Russian policeman, Yuri, is reflecting on the ‘arranged’ death of his lover Maryna’s husband, which he sees as murder and she describes as ‘liquidating an enemy’.

When an old friend offers Berlin a job performing effective due diligence on a potential Russian business partner for a UK firm — an assignment that requires her to fly to Moscow on Christmas Eve — the narrative threads start to intertwine.

That said, in what I am coming to see as typical of Hauxwell’s plotting style, many threads remain loose right up to the end of the book. This is in part because Berlin is not the most reliable of narrators, her judgment increasingly clouded as a result of having her buprenorphine confiscated by the Russian police within a day of her arrival in Moscow.

The murkiness of the plot also reflects the milieu. Hauxwell’s Russia is a harsh, corrupt and cynical place. The old Soviet rulers have become the new Capitalist elite. The militsya has become the politsya. Utkin observes,
The consequent changes had been profound: instead of an over-manned, lazy and corrupt political tool, they had become an under-manned, lazy and corrupt political tool. (p.11)
No one is reliable, though everyone must rely on some one above them — a krysha or ‘roof’ — for protection. As Charlie Inkpin, the woman who meets Berlin when she arrives in Moscow explains,
They look after you, they keep your secrets — but then you have to deliver, as and when required. (p.110)
Equally ambivalent is a thread involving the role of British intelligence in Moscow, and the British government’s handling of business deals with Russian companies, which seem to demonstrate — in the words of Berlin’s journalist friend — ‘that its priority is trade, not justice.’

On the subject of loose plot threads, I did find the backstory about Berlin’s Russian paternal grandfather a tad vague. But I wouldn’t put it past Hauxwell to pick this up again in subsequent installments in the series.

There are no good guys and bad guys in A Morbid Habit. Everyone is dirty, with the exception of Berlin, and even in her case, ‘She was clean, but felt dirty.’

One for those who like their crime fiction on the dark side.