A Murder Unmentioned by Sulari Gentill 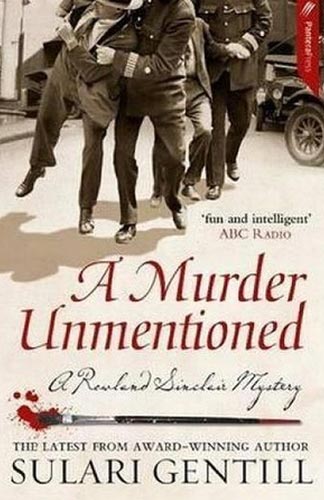 In the opening pages we are introduced to pioneer aviators, Charles Kingsford Smith and a young Nancy Bird, giving Rowland a lesson in aeronautical acrobatics at the Mascot Aerodrome. Having subsequently flown himself down to the family’s pastoral estate near Yass, Rowland encounters the gardener Edna Walling clad in jodhpurs and a man’s shirt. Edna’s been employed by his brother Wilfred to do a bit of landscaping. Like the young Robert Menzies, whom we meet later, Edna has a key role to play in this, the sixth book in the series, and by far the most interesting.

A Murder Unmentioned has a dark side. The more sombre plotline hinges on Rowland’s privileged but traumatic childhood, and revelations about the tense relationship between himself, his older brother Wilfred, and their late father, Henry. The institution of the family is front and centre. There is, however, an irrepressible glee in Gentill’s invention that moderates the seriousness of this fraught dynamic.

Consider Rowland’s domestic arrangement and scandalous entourage of like-minded others who reside with him in his Woollahra mansion. Here Rowland likes to paint nudes in the drawing room in the tradition of his mentor, Norman Lindsay, when he’s not gadding about town. Where Rowland goes, his companions go too.

This motley crew include Rowland’s muse, and the object of his unspoken passion, the red-headed, proto-feminist sculptor, Edna Higgins. The UnResolved Sexual Tension is palpable. There is also the unoriginal poet, Milton Isaacs, much given to quoting the romantics. And then there’s Clyde Watson Jones, the altogether useful chap equipped with the muscle and the mechanical nous to deal with most of the practical problems encountered in their sleuthing adventures. The fifth member of this Famous Five series for grown-ups (with much more complex plots and a better prose style), is Lenin, the rescue greyhound. Each has their own indispensible part to play.

As always, every chapter opens with a relevant snippet from a periodical of the time. Once again, telling the fictional from the real is part of the fun. Newspapers cited include The Sydney Morning Herald andThe Canberra Times, as well as a swag of venerable regional publications such as The Camperdown Chronicle (which is still being published), The Kalgoorlie Miner (which has relocated online) and The Molong Express which now has its own Facebook page.

These varied extracts include newsworthy events, as well as advice columns on such topics as overcoming shyness when proposing marriage or how to decorate a room to make it more cheerful. A yellowish pink apparently helps, although I doubt it. There’s even an item from The Australasian in 1933 reporting on a lecture given by Edna Walling on the topic of tree planting in the suburbs.

Most chilling but apt is the extract in which an American Judge is quoted extolling the benefits of corporal punishment. This recommendation appears at the head of a chapter revealing the full extent of the late Henry Sinclair’s cruelty towards his youngest son. It is at this point that Rowland is revealed as the prime suspect in his father’s murder some fifteen years earlier.

Clever Gentill. Investigating the past has never been more fun.

Thank you to The Age and the Sydney Morning Herald where this reivew first appeared in December, 2014.