A Pocketful of Eyes by Lili Wilkinson 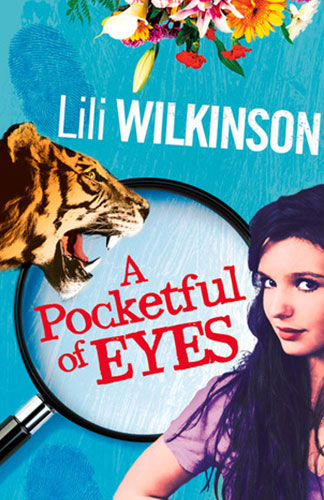 Author: Lili Wilkinson
Publisher: Allen and Unwin
Copyright Year: 2011
ISBN: 9781742376196
Review By: Sue Bursztynski
Book Synopsis:
Bee is spending her summer holidays working in the taxidermy department of the Melbourne Museum of Natural History before beginning Year 12. She has enough problems on her plate, what with her best friend running off with her boyfriend and her geeky mother bringing home a new boyfriend of her own from the Dungeons and Dragons group, when her grumpy boss is found dead in the Museum’s Red Rotunda one morning. The police say it’s suicide, but Bee hasn’t been reading lots of crime fiction from Trixie Belden to PD James for nothing. Can she and the cute but exasperating Toby solve the mystery with nothing but their logic, a few clues and asking “WWPD?” (what would Poirot do?)?

This book is great fun. I found myself chuckling all the way through, and the cute boy will attract young female readers.
You do, however, need to suspend disbelief if you’re reading this as a mystery. How likely is it that the police would declare suicide before so much as moving the body from the museum? What about forensic samples? Why are there no police officers asking questions? Also, Bee and Toby seem to get away with an awful lot of nicking important clues from suspects’ offices without anyone wondering where the documents have disappeared, let alone saying, “Hang on, weren’t those pesky kids here five minutes ago?”. There is also the occasional glitch, such as Bee and Toby having coffee and cake in the museum cafe a page or two after we were told that the café was closed due to the murder.
But belief is worth suspending.
It’s a very entertaining romp through the halls of crime fiction, with red herrings, winks and nods to various writers and I have to admit that, while there were a lot of clues – or, rather, Clues – leaping around yelling, “Hey! Here I am!” at the reader, I didn’t see the rather Poirot-ish conclusion coming.
It was worth reading for the heroine’s personal life alone. With a house full of D and D, a mother who’s on the Playstation duelling Darth Vader and a Celestial Badger in her mother’s life, who can blame her for fleeing into the world of logic and reality? At the same time, her mother is quite lovable and there is no doubt of her affection for Bee. There are definite coming-of-age elements in the novel.
Girls will get a chuckle out of this. I did.