A record year for Sisters in Crime Australia: AGM Report 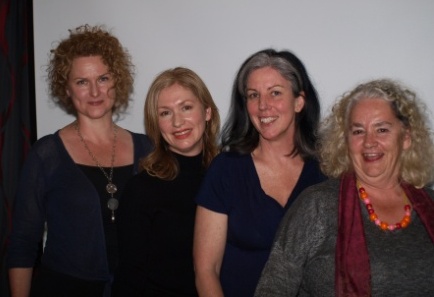 The elections followed a report by Carmel Shute, founder and public officer of Sisters in Crime Australia :

At the risk of sounding like a cracked record, the past year has been a year of many records for Sisters in Crime Australia.

A record 96 books competed for the Davitt Awards for best crime books which are now in their 15th year. It was a big advance on the 7 books in contention back in 2001 at SheKilda, Sisters in Crime’s 10th anniversary convention. According to my maths, it’s an increase of 1371%!

A record number of members voted for the Davitt (Readers’ Choice).

The Davitt Adult Novel winner Big Little Lies by Liane Moriaty has sold a million copies in the US alone. Liane is also the first Australian author to have a novel debut at number one on the New York Times bestseller list. Film and television rights for this book have been acquired by Nicole Kidman and Reese Witherspoon who will both take roles in the production.

Walkely-award winning journalist, Caroline Overington, won the Davitt (Non-Fiction) for Last Woman Hanged and thanks to her being an Associate Editor of the Australian Women’s Weekly, the win got a wonderful write-up in the Weekly which is, of course, Australia’s top selling magazine. I only buy it for the recipes, of course .

A record 207 short stories competed for a record $8,800 in prize money for last year’s 21st Scarlet Stiletto Awards which were presented by the wonderful Marta Dusseldorp, star of ABC1’s Janet King. We were concerned that we might have to run another campaign to persuade the ABC to do another series but that luckily that’s not been the case and shooting started a couple of weeks ago.

The previous year, as you might recall, we’d had to mount a big campaign to persuade the ABC to commission a 3rd series of Miss Fisher’s Murder Mysteries. We were successful and the show has gone on to conquer the world.

If you go onto our website, you’ll discover how it now has a cult following in the US and that internationally fans are using Facebook, Tumblr, fanfic sites, blogs, Pinterest, Instagram, YouTube, fan sites and forums – and, of course, DI Jack Appreciation Society (DIJAS) Facebook page – to debate on each episode and much more. And it’s not just Phryne who’s hugely popular. As of last Wednesday, a recent Nathan Page interview had 6,088,221 downloads – apparently, there are many who yearn for his big policemen’s boots under their bed.

It looks like a Phryne movie is being made in the UK. All hail Kerry Greenwood, a founding member of Sisters in Crime and author of the books on which the series is based.

The producer, Every Cloud Productions, kindly stepped in this year to offer the first prize of $1500 in this year’s Scarlet Stiletto Awards competition which altogether has a record $9,350 in prize money up for grabs..

So far, 19 winners, including category winners, have gone on to have novels published. Next year, it will be 20 when Aiofe Clifford will have a book out in both Australia and the UK. Simply on the strength of her various Scarlet Stiletto wins and a bit of persuasion from us, Carter Brown Literary Agents took her on and the rest is history.

This week, Lucy Sussex, a long-time member of Sisters in Crime, notched up another record of sorts – against stiff competition she won the History Publication Award for Blockbuster! Fergus Hume and the Mystery of a Hansom Cab at the Victorian Community History Awards.

Tomorrow I have the privilege of attending the premiere of The Dressmaker, produced by Sue Maslin. Sue’s next project is The Lost Swimmer, based on the debut novel of member Ann Turner who spoke here in June.

In another record of sorts, we’ve finally introduced online membership and online event bookings through Eventbrite, thanks to our hard-working event coordinator Michaela Lobb who can’t be with us tonight as she’s having a well-earned holiday overseas.

And finally, after many years of promises, a new website is the last stages of development – thanks to Lindy Cameron, Zerafina Zera, Caz Brown and Janice Simpson who led the work of the committee. Lindy and Michaela are also organising a new logo.

A budget committee involving Maggie Baron, Ann Byrne and Janice has reorganised our finances and established improved  budgetary processes. Maggie stood down as Treasure at the end of the financial year but we have been thrilled that long-term member, Robyn Byrne, has stepped into her rather big shoes. Robyn is interstate this week and unfortunately couldn’t be here tonight.

Under the model rules which apply, we’re bound to have elections for President, Vice-President, Secretary and Treasurer. These 4 positions will form an executive, which will do much of the running of the organisation, along with the event coordinator who will be co-opted.

There’s been a lot of change but what’s remained constant over the past year are our wonderful events and the support we offer to authors. Tonight’s event, with 3 debut crime authors – Tania Chandler, Emma Viskic and J M (Jenny) Green, is what we’re all about.

Over the past year, we’ve also been able to draw on other talented members to present events, including Liz Porter, Leigh Redhead, Angela Savage, and Vikki Petraitis plusFiona Eagger from Every Cloud Productions. Convenors have also shared the load – Sandra Nicholson, Maggie Baron, Jacqui Horwood, Janice Simpson and me. Long-term memberJane Clifton will do the honours with Danielle Cormack from Wentworth at this year’s Scarlet Stiletto Awards.

We think Jane Clifton was almost fated to present the awards with Danielle Cormack. She is still most famous for her 1980-84 role as bank robber Margo Gaffney in Prisoner – the show that Wentworth is based on. She was the singer with Stiletto back in the 70s and, more recently, has turned her hand writing crime novels with her latest published by Lindy Cameron’s Clan Destine Press.

As announced at last year’s AGM, Sisters in Crime has instituted a system of Life Time Memberships and this year we honouredCathy Martin, Vivienne Colmer, Phyllis King and Robin Bowles.

Internationally, in the past year, the crime writing world honoured Ruth Rendell and P. D James who both met their end, though from natural, not murderous, causes.

The Queensland chapter is now timing its meetings to coincide with events at the Avid Bookstore and I regret to report that despite a meeting back in May, the NSW Chapter has still not gotten off the ground.

Next year is our 25th anniversary and we’re planning a one-day crime spree, perhaps at St Kilda Town Hall and perhaps culminating in the Scarlet Stiletto Awards. What do you reckon?

Finally many thanks are also due to:

Let’s also thank all the other convenors for their hard work. We all work getting these events together but we all have different special jobs.

And most especially thanks to all of you, for sticking with us. Thank you for coming. I trust you’re still having fun which is our main reason for existence. Judith Rodriquez told me she been involved in a lot of literary organisations over many decades but Sisters in Crime is the only where she has fun. 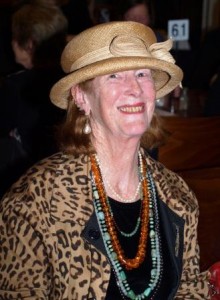 I’ll close with the words that Susan Hickey (pictured above on one of her trade-mark hats) included on a card with her membership renewal last week: “Thank you for everything you do for writers, books, e-books, etc, etc. I love it all. Wonderful evenings out with incredible speakers, fab debates and funny, talented chairs, international well-known writers I have been reading for years and new stars in the making. I love it. Always heaps of fun.”