A Taste of Evil by Christina Carlisle 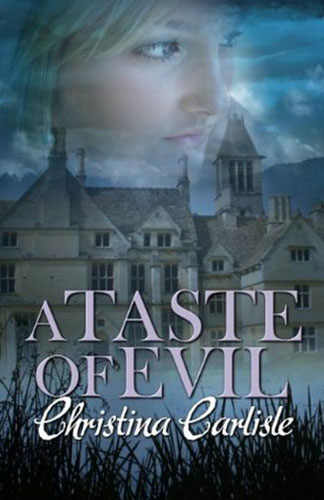 Author: Christina Carlisle
Publisher: Champagne Books
Copyright Year: 2012
ISBN: 978-1-77155-039-0
Review By: Lesley Vick
Book Synopsis:
Famous novelist Julia Raymond is found brutally murdered in the grounds of her estate in the English Lake District. Her death throws suspicion on her husband and sister, both of whom have reasons to want Julia dead.

The discovery of another vicious murder of a woman in nearby woods terrifies the close-knit community and police suspect the work of a serial killer who appears to be obsessed with Julia. Unable to leave the scene of her crime, Julia’s spirit watches as the police investigation gradually reveals her family’s terrible secrets.

This book is a real page turner with a most unusual perspective. Like the Academy Award winning 1950 film noir, Sunset Boulevard, the narrator of the story is the murder victim and it easier to accept that premise than might be imagined. The Australian author has set the story in the beautiful English Lake District and there are several credible suspects, including members of the murdered woman’s family. The feisty spirit of the victim/narrator is determined to follow the police investigation into her own death and in the process she discovers some uncomfortable revelations about her family members and is shocked by their less than flattering opinions about her. She herself is a snappy, humorous character and there is a surprising amount of amusement in the midst of the tension as we try to work out who is the murderer. The victim’s funeral, for example, provides several funny moments and the protagonist has a sense of humour about herself. She says to herself at one point: ‘I was feeling sorry for myself. Abused, cheated on and now murdered. And I did try to be nice to people … most of the time’. This insight captures her character well and is indicative of the sort of discussion she necessarily has to have with herself during the investigation.

Within the unusual framework the story is a well-plotted police procedural with interesting details about seemingly well-researched investigative procedures. The Lake District setting is a significant component in the story and is used effectively. Most particularly, the suspects are very well drawn. They are all flawed and recognisable people and Carlisle portrays their behaviour, motives and reactions very skilfully as various secrets are revealed during the murder investigation. The twists and turns of the story keep shifting suspicion from one possible culprit to another. The suspense is cleverly maintained as we follow our victim/narrator when she listens in to conversations among the suspects or looks on as the police question them. Sometimes she is very annoyed because, although she can transport her spirit to another place instantly, she cannot be in two places at once and she misses some of the action – and so do we. The writing flows well and the dialogue is convincing. Carlisle’s previous books were successful romance novels and she has transferred her skills extremely well to the thriller genre. This is a very satisfying read and hopefully Carlisle will produce more thrillers in the future.