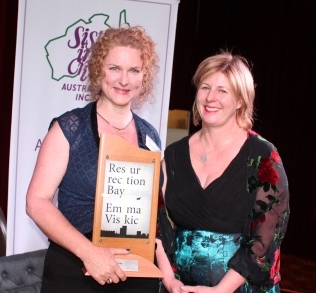 “Emma Viskic is the first author to take out three awards on the one night in the 16-year history of the Davitts,” Jacqui Horwood, the Davitt Judges wrangler, said.

“Not only has Emma Viskic written an enjoyable and tense debut crime book but she has created a memorable main character in Caleb Zelic who is an investigator and profoundly deaf. The pace doesn’t let up as the reader travels with Caleb through his past and gains an insight into the complexities of deafness and disability, and of Aboriginal Australia,” she said.

Viskic, a classical clarinettist, has also won two of Australia’s top short story awards for crime fiction: the Ned Kelly S.D. Harvey Award, and the Thunderbolt Prize. She is currently writing the sequel to Resurrection Bay with the help of a grant from Creative Victoria.

Click here to read the article in The Age, 29 August.

Click here to listen to the interview on RN Books & Arts, 30 August.

Booktopia, Australian pre-eminent online bookseller, sponsored this year’s Davitt Awards. A video message from Booktopia had the 120 crime authors and fans at the gala dinner in riotous laughter. Global literary sensation, Liane Moriarty (right), presented the awards after a “gentle interrogation” by crime author Vikki Petraitis (left). Moriarty won last year’s Davitt Award (Best Adult Novel) for Big Little Lies which has been made into a HBO TV series by Reese Witherspoon and Nicole Kidman who also star in it.

This year, 77 crime books by Australian women were in contention, an 11-fold increase from when the Davitt Awards were first presented in 2001. Risk, a story of two best teenage friends and the murky world of online dating, has been translated into French, German and Korean and added to the curriculum of many Australian schools for Years 7-10. It was adapted to stage by a school in Sweden and performed in May. Ferris’s latest release, Black, is already making its way onto the curriculum of Australian schools and is being published internationally. The Davitt (Best Children’s Book) went to R A Spratt (Bowral, NSW) for Friday Barnes 2: Under Suspicion (Penguin Random House). The judges praised it as “a laugh-out loud story” of how Friday and her oddball friend, Melanie, solve a bevy of mysteries when negotiating the politics being a teenager in a boarding school. Spratt is currently writing the 6th book in her Girl Detective series and quipped that the Davitt trophy made a “handy blunt instrument”.

Alecia Simmonds, an inter-disciplinary scholar in law and history at Sydney’s University of Technology and a columnist for Womankind magazine and Fairfax Media, won the Davitt (Non-Fiction) for Wild Man (Affirm Press), “a compelling and insightful story of mental illness, family violence and masculinity”, in the view of the judges. Simmonds said, “When we closed the asylums and failed to fund community care, people with no psychological training, such as police and female family members, found themselves on the frontline of mental illness. This book shines a light on some of those people who are usually relegated to the wings.” A special Judges’ Award was made to J M Peace for her debut novel, A Time to Run (Pan MacMillan Australia), a police procedural set on the Sunshine Coast in Queensland where she works as a senior constable. A Time to Run has been optioned and is slated for release in Germany in April 2017. The sequel, The Twisted Knot, was warmly received upon its release in July 2016. Jay intends on continuing to write until she can give up her ‘day job’. Peace was unable to attend the awards and send her acceptance speech by video. Her trophy was accepted by Sandra Nicholson, Sisters in Crime convenor and former Victoria Assistant Police Commissioner.

Highly recommended were children’s novel Verity Sparks and the Scarlet Hand (Walker Books Australia) by Susan Green (Castlemaine, Vic) and true crime book, Why Did They Do It? (Pan Macmillan Australia,) by journalist Cheryl Critchley and academic Helen McGrath, who are both from Melbourne. At the Davitt Awards ceremony, Sisters in Crime announced that it would be holding a 25th anniversary convention –  SheKilda 3: One Day Crime Spree –in Melbourne on Saturday 19 November 2016. SheKilda3 will involve more than 40 leading novelists, true crime writers, screenwriters, producers, publishers, and scholars. The scene of the crime is St Kilda Town Hall, the site of Sisters in Crime’s 10th anniversary convention.