A Trifle Dead by Livia Day 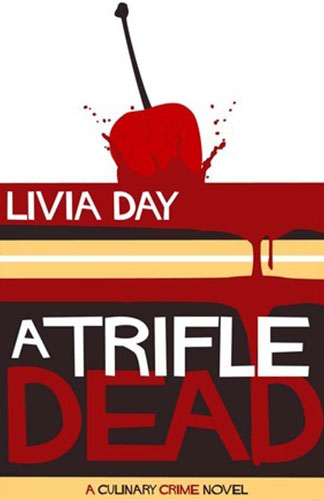 Author: Livia Day
Publisher: Twelfth Planet Press
Copyright Year: 2013
Review By: Michaela Lobb
Book Synopsis:
Tabitha Darling has always had a dab hand for pastry and a knack for getting into trouble. Which was fine when she was a tearaway teen, but not so useful now she’s trying to run a hipster urban cafe, invent the perfect trendy dessert, and stop feeding the many (oh so unfashionable) policemen in her life. When a dead muso is found in the flat upstairs, Tabitha does her best (honestly) not to interfere with the investigation, despite the cute Scottish blogger who keeps angling for her help. Her superpower is gossip, not solving murder mysteries, and those are totally not the same thing, right? But as that strange death turns into a string of random crimes across the city of Hobart, Tabitha cannot shake the unsettling feeling that maybe, for once, it really is ALL ABOUT HER. And maybe she’s figured out the deadly truth a trifle late….

I came across A Trifle Dead at a time when all ‘signs’ seemed to be pointing to Tasmania. So many Tasmanian-related things were cropping up everywhere in my life, finally reaching a pinnacle when my partner came home after 6 evil nightshifts in a row and demanded a break out of the city, somewhere to rest and get some fresh air.

I happened to be sitting on the couch with The Cat of the House and was just starting to read Livia Day’s culinary cosy A Trifle Dead – set where? Hobart, of course.

30 pages into the colourful, vibrant world of the main character, Tabitha Darling, I was hooked and the trip to Tassie was booked!

I found it impossible not to love A Trifle Dead. It was such fun to read that about half way through I felt trepidation that it was all too good to be true and that the author was going to me hideously let me down by a fatal plot flaw or a too-predictable ending. But it never happened!!

Oh the joy of a novel that keeps up the humour AND the plot all the way to the very end.

Livia Day is the pen name of Tansy Rayner Roberts, created to distinguish Tansy’s new crime works from her successful, award winning fantasy novels (which have now also gone onto my “must read” list).

Tabitha Darling is the central heroine in Livia Day’s “Café La Femme” series of which A Trifle Dead is the first novel. Tabitha is also a self-proclaimed nosy, vintage loving, chef whose eatery, Café La Femme attracts a mixed assortment of characters through its staff, customers and the other tenants of the building who live on the floors above. And police….lots and lots of police frequent the cafe, all determined to keep an eye on Tabitha as a mark of respect and friendship to her father, a former Hobart policeman who has retired to the mainland with a new wife.

Odd things are happing in Tabitha’s orbit (which doesn’t really surprise anyone who knows her) starting with the discovery of a body in one of the upstairs flats above the Café and Tabitha is determined to find out what is going on. Partly because Bishop (the very hot cop that Tabitha refuses to have a crush on) wants her to stay out of it and partly because as previously mentioned, Tabitha is A Nosy Person. Encouragement to investigate also comes from a new to Hobart, yummy accented, young Scotsman who is keen to stay at her side in search of ideas for his blog.

The plot is solid, the humour delightful, the food descriptions hunger inducing – there is so much to enjoy in A Trifle Dead that I am going to shut up and let you get cracking reading it.