A Willing Victim by Laura Wilson 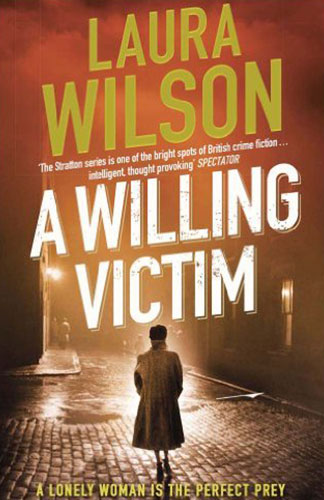 In Laura Wilson’s recreation of mid-1950s England many households show the impacts of the Second World War, which generated not only deaths, illnesses and enforced relocations but more than the usual numbers of unorthodox liaisons, extra-marital births and dodgy documents. This is a society in which the origins of children aged between about 10 and 12 are not always known. Wilson’s adults are unsettled and looking for certainty. In London thousands crowd into arenas to hear American evangelist Billy Graham preach. Those worried by geo-political crises in Hungary, Algeria and the Suez Canal wonder if they can place their hope in the United Nations to prevent a nuclear war. Some look to psychics and esoteric writings, or to escapist entertainments. Others are disturbed by the possibility of outer-space rivalries. A few go so far as to walk away from mainstream responsibilities, getting together in communities led by charismatic men with obscure backgrounds.

Wilson’s police procedural plays out in this uneasy social climate, with most of the action happening in and around a commune, the Foundation for Spiritual Understanding, located in a former rectory in provincial Suffolk. Members of the group are convincingly sketched in all their self-policing regimentation, willing self-delusion and diverted passions. In a fascinating Note at the end of her text Wilson reveals she was reared in just such a commune, her parents having joined it in the late 1950s. “[I]t spiritualised the trivial and mundane; it had very strict rules governing everything from day-to-day conduct to gender roles; and it took up a hell of a lot of everybody’s time and practically all of their mental space”. The novel’s first murder victim is a scholarly man who was a special favourite of the Foundation’s director before being supplanted by a 12-year-old boy rumoured to have been immaculately conceived. Its second victim is a village woman who believes the boy may be her child.

Investigating the deaths are two male detectives, London-based Ted Stratton, the hero of Wilson’s DI Stratton series, and Suffolk-based Ben Ballard. Each is a man of his times, his life echoing the prevalence of longing, uncertainty and social change. Ballard’s wife is so distressed by being unable to conceive that she has resorted to attending meetings at the Foundation. Stratton, a widower for 12 years, has a flighty sometime lover who works in the film industry. His daughter, also working in film, lives in a lesbian relationship. His son is leaving to serve in Egypt.

A stunningly sexy woman associated with the Foundation attracts Ballard’s attention early in the novel. The fascination this Mary (aka Ananda) exerts on every man in her force field takes the investigation irresistibly into her personal history. This mires many chapters in the confusing, tiresome dating of rural deaths, marriages, affairs, pregnancies, baby abandonments and unofficial adoptions. Is Mary the birth mother of the 12-year-old who is being groomed as a new spiritual leader? And who is the boy’s father? Suspects range from American servicemen to the rich author underwriting the Foundation’s operations. Eventually a crazed burst of activity by Mary/Ananda precipitates the solving of the mysteries and murders. Ballard’s wife declares the story’s moral: “people aren’t always what you think”.