After The Darkness by Honey Brown 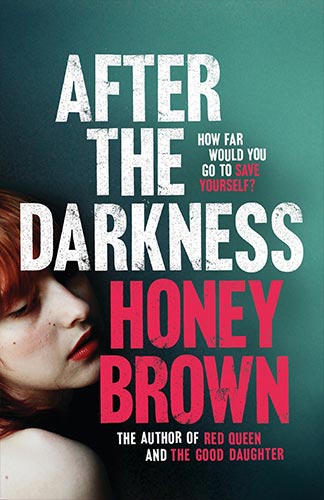 Author: Honey Brown
Publisher: Penguin Books Australia
Copyright Year: 2012
ISBN: 9780670075973
Review By: Karen Chisholm and Susan Woldenberg Butler
Book Synopsis: The problem I had with an earlier book of Honey Brown’s was that whilst the thriller aspects of the book really worked, I was less convinced by the post-apocalyptic scenario and the happy ever after ending. AFTER THE DARKNESS solved those personal prejudices, and presented me with a thriller that worked on just about every level.

I just love thrillers that make the hair on the back of my neck stand up, that present a scenario that’s unexpected, quietly disconcerting and extremely worrying. Particularly where the tension ramps up, the outcome’s not immediately apparent, and the resolution ambiguous. AFTER THE DARKNESS takes a pretty normal married couple, successful in their business, happy in their family life and their love and relationship together, and in one seemingly innocent outing, rips that into little tiny itty bitty shreds. It then takes these two traumatised individuals, Bruce and Trudy Harrison, and makes everything a whole lot worse.

All of which adds up to one of those much touted, and often not achieved, “unputdownable book”. But AFTER THE DARKNESS truly was very difficult to put down. The writing is taut and subtle, the tension is built within the reader’s head, as it builds in the characters lives.

There are clever differences in the plot which give Brown options to explore the couple’s individual and combined reactions and relationships giving the book a refreshingly different outlook. The characterisations aren’t stereotypical – Bruce and Trudy may be a married couple, but their roles and reactions aren’t limited by their gender and standard expectation. There’s cross-over and ambiguity in their reactions, actions, and responsibilities. It’s that realness thing again – they seem like very real people, in a very real scenario that’s spiralling rapidly.

It’s actually not that often that I find myself immersed in a book that I truly can’t put down. Not only was AFTER THE DARKNESS one of the best thrillers of it’s kind I’ve read in a long time, it gave me a chance to work long and hard on some good “can’t sorry… reading” excuses.

Above Review by Karen Chisholm

After the Darknessis the author’s third novel, after Red Queen and The Good Daughter. Most of the action in this book occurs after a traumatic event. The book looks at the effects of this event on the couple which experienced it, and on their family and friends. Bruce and Trudy, a happily married couple in their forties, decide to end their seaside holiday with a spontaneous stop at a cliff-side house that is also an art gallery. Their neat and tidy lives are upended when they are brutalised by the house’s lone resident, a crazed architect.

The author never tells us what actually happened to Bruce, but strongly hints that he was homosexually raped. For this, the lone resident pays with his life: Bruce kicks his head in when he is already unconscious on the ground, because he should die ‘for what he has done.’ The pair finds it difficult to assimilate the assault and Bruce’s reaction as they try to resume their lives in property development and management. The first brutality leads to a second similar event by Bruce when he suspects Trudy of infidelity. She is the ever-efficient, omnicompetent wife who can do everything. She does the thinking for them and keeps their lives from imploding.

After the Darkness creates a sympathetic if bewildered family, particularly the children and her mother. From all the hype, I expected a journey into the modern Australian semi-rural psyche, perhaps in the mode of James Lee Burke’s searing, poetic explorations in the Louisiana bayous and backwaters. How can there be a psychological exploration of the effects of something that the author cannot bring herself to name? Worse things have happened.

Above Review by Susan Woldenberg Butler