All by Myself, Alone – Mary Higgins 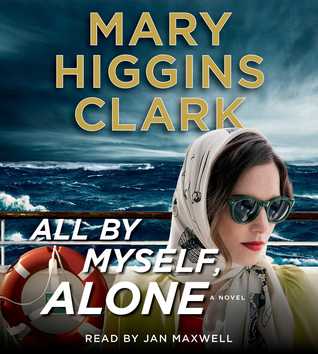 Fleeing the humiliating arrest of her husband-to-be on the eve of their wedding, Celia Kilbride, a gems and jewellery expert, hopes to escape form public attention by lecturing on a brand-new cruise ship, the Queen Charlotte.

On board she meets eighty-six-year-old Lady Emily Haywood – the owner of a priceless emerald necklace that she intends to leave to a museum after the cruise. But three days out to sea Lady Emily is found dead – with the necklace missing. And the list of suspects is large and growing. Celia sets out to find the killer, not realising that she herself is in mortal danger before the ship reaches its final destination.

Longstanding readers of the bestselling author Mary Higgins Clark, who turns 90 later this year, will be familiar with the style that she displays in this latest book.

A group of well-heeled travellers on a luxury cruise ship’s maiden voyage are nearly all revealed to be potential suspects in the murder of Lady Em (as she is known) and the theft of her precious necklace. Another passenger has also disappeared overboard in circumstances that may be related to Lady Em’s death. Others on board include a guest lecturer on Shakespeare, a lawyer who is hoping to persuade Lady Em to return the necklace to Egypt and a rather needy woman who won the cruise in a raffle.

As the story progresses it becomes clear that several people had reasons to prevent Lady Em reaching the ship’s destination alive, a more likely explanation than her death being connected to the supposed curse arising from taking the emerald necklace to sea.

The man overboard, Roger Pearson, who was Lady Em’s accountant/executor, may have been cooking her books in his own interests rather than hers. His unhappy wife has her own concerns about Roger. Another of Lady Em’s employees, her personal assistant Brenda, has also been taking advantage of the old lady and she fears exposure once the voyage is over. A notorious jewel thief, the Man of a Thousand Faces, is also believed to be on board, hoping to steal the emerald necklace.

Meanwhile, guest lecturer Celia Kilbride, despite her own worries associated with her ex-fiance’s financial fraud, tries to solve the various and possibly connected mysteries. She is joined in this endeavour by Clark’s well-known amateur sleuth Alvirah Meehan and her husband Willy who are celebrating their forty fifth wedding anniversary. Alvirah and Willy are known to provoke mixed reactions among Clark’s readers, some of whom find them very irritating while others think they are endearing. But, as always, Alvirah cuts through to solve the mystery.

This is a light, undemanding and mildly entertaining read for a lazy afternoon