All Day and A Night by Alafair Burke 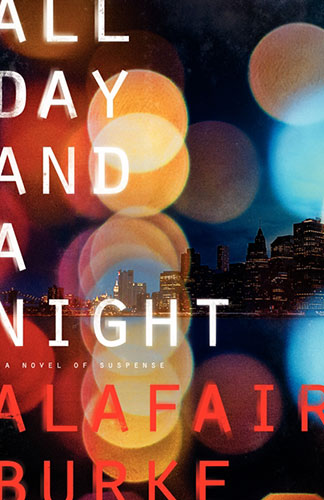 Author: Alafair Burke
Publisher: Harper
Copyright Year: 2014
Review By: Anne Elizabeth Buist
Book Synopsis:
A murder case with ties to a convicted serial killer leads a young defense lawyer and an NYPD homicide detective into parallel investigations with explosive and deadly results in this superb mystery. The latest story dominating the tabloids – the murder of psychotherapist Helen Brunswick-couldn’t be further from Carrie Blank’s world handling federal appeals at an elite Manhattan law firm. But then a hard-charging celebrity trial lawyer calls Carrie with an offer she can’t refuse: Anthony Amaro, the serial killer police blamed for the murder of Carrie’s older sister, Donna, has new evidence related to Brunswick’s murder that he believes can exonerate him. Determined to force the government to catch Donna’s real killer, Carrie takes on Amaro’s wrongful conviction claim. On the other side of Amaro’s case is NYPD Detective Ellie Hatcher, who, along with her partner, JJ Rogan, is tapped as the “fresh look” team to reassess the investigation that led to Amaro’s conviction. The case is personal for them, too: Ellie wonders whether they got the assignment because of her relationship with the lead prosecutor, and Rogan has his own reasons to distrust Amaro’s defense team. As the NYPD and Amaro’s lawyers search for certainty among years of conflicting evidence, their investigations take them back to Carrie’s hometown and secrets left behind there. And when Carrie falls victim to a brutal attack, it becomes clear that the young attorney got too close to the truth.

All Day and a Night has two parallel stories from a cop and lawyer perspective, each told from close third (female) person. I’ll try not to do a spoiler…but it did occur to me as I was reading that when we follow one character we expect them to still be alive at the end and I wondered if this rule applied in this format…We’re all used to multiple or several perspectives in books, but this stood out as definitely different, because you essentially have two female protagonists that is hard to decide if you like one more than the other.

Set in and around New York/ NY State we have a repeat murder with a strange unique style happening years after while the apparent perpetrator is still in gaol. Next thing he’s out, the cops want him back and his lawyer (the junior one) wonders if perhaps he did kill her sister after all and whether she should have stayed in the plush job she left. She should have and motive wise it is a weak part of the story—there is no good reason for her to take on the case as she soon works out.

So—did the bad guy that was put away actually do it and therefore who is the copycat, and who killed her sister if it isn’t either of them? We weave in and around past and present with some very current menace and a very irritating celebrity lawyer (we’re allowed to dislike the non-protagonists!) –when the end comes we know who did it in advance but probably not until two thirds the way through.

I didn’t enjoy it as much as If You Were Here, mostly because there were too many long pages of fairly dull dialogue and the characters weren’t as real as in the earlier book. But there’s still some interesting aspects to the story, setting and character and I like crime writers trying different things and will certainly try her again.