All These Perfect Strangers – Aoife Clifford 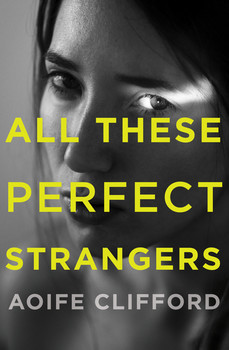 You don’t have to believe in ghosts for the dead to haunt you. You don’t have to be a murderer to be guilty. Within six months of Pen Sheppard starting university, three of her new friends are dead. Only Pen knows the reason why. College life had seemed like a wonderland of sex, drugs and maybe even love. The perfect place to run away from your past and reinvent yourself. But Pen never can run far enough and when friendships are betrayed, her secrets are revealed. The consequences are deadly.

If the crime fiction world needed a fresh book with ‘Girl’ in the title, this clever new Australian novel could be renamed Teflon Girl. Again and again Aoife Clifford’s protagonist turns up in proximity to the suspicious death or injury of another young adult and, every time, blame fails to stick. Pen Sheppard is an extraordinary survivor, thanks to her author, whose strong suit is wily plotting.

While All These Perfect Strangers could be classified as a psychological thriller, I don’t read the narrative as growing out of the protagonist’s unique psychology. The storyline owes its impetus to plotting rather than to character-driven impulses. Pen is a construct created to serve the author’s need for an unreliable and morally dodgy narrator, and as such she’s a little hazy as a person, despite the fluency of her narrating and diary-keeping voices.

The signs of Clifford’s interest in tale-telling and ploys are on display for readers to relish if game-playing is to their taste. ‘Pen’ of course suggests hand writing, the personal act of recording, shaping and omitting. At her psychiatrist’s request Pen Sheppard is progressively writing and selectively reading from an account of the last six months, during which all but a couple  of these deaths and injuries occurred. Money in the form of a compensation payout is the goal keeping her going. ‘Pen’ is short for Penelope. In classical myth Penelope was the wife of Odysseus, aka Ulysses, and her storied success rests on her canny use of weaving. In her husband’s 20-year absence Penelope was obliged to fend off a succession of suitors keen to grab control of his kingdom. She told each suitor she could not contemplate remarrying until she had finished weaving a shroud for her father-in-law, and then each night in secret she undid the latest bit of weaving. Pen Sheppard is ducking and weaving in the best of literary company. Clifford has fun with this. She not only includes a young man, nicknamed Joyce, wandering about carrying a copy of Ulysses but also – shades of Hamlet and dramatic traps — has her student characters attending a screening of the film noir Double Indemnity, its murder conspiracy and financial deceit storyline scripted by Raymond Chandler and Billy Wilder.

From the outset Pen’s days and nights as a first-semester law student in 1990 in a city that could be Canberra, in a cluster of residential colleges named for dead prime ministers, are clouded with intimations of menace. Pen meets the flamboyant Master, a brilliant fictional creation, and is given to understand how easily her essential bursary might be withdrawn. She soon encounters organised drug dealing, bikies at the bar, a game of Truth or Dare, an ongoing Murder Game, and warnings of attacks by a Screwdriver Man. She lives with an odd coterie of fellow students busily misrepresenting their backgrounds, clothing themselves in new guises and causes, snooping into others’ secrets and stealing items with evidence value. Throughout this period Pen is also privately recalling the intermittently violent and dishonest life she has left behind in the country town where her mother has lived with a series of conniving and abusive men. Pen has been hated by the community back there since she and bestie Tracey were involved in a 1987 incident that led to the death of a local policeman. Clearly Pen has not told all that happened, and the reader must wait on Clifford to progressively reveal more through her protagonist’s flashbacks.

Whether it is ever possible to set down a definitive account of how a death came about or ever possible to justly apportion blame – these are questions pretty much answered in the negative by this novel. Through Pen, Clifford works with the familiar notion that any story might be told in a hundred different ways, any inkblot seen in a thousand ways, with no absolute truth or right being available. Yet at the same time readers of genre fiction enjoy closure. This is a difficulty that Clifford is not the first talented writer to have struggled with.

On my first reading of Perfect Strangers I was confused by the final pages. It was not that I required complete tying off of the loose threads in the weaving; I simply felt muddled and wondered whether I had not read carefully enough. On my second reading I gained a better appreciation of the late-in-the-piece events and revelations. Perhaps an author with a series of novels behind her could have constructed a sure-fire ending. However I think Clifford handles her material knowingly and I don’t hold it against her that I wanted to go back through the plot both to check what I might have missed and to savour her use of evasive tactics.

All These Perfect Strangers is a novel which gives more on a second reading. It has sufficient nuances and ideas to challenge a thoughtful reader, and thus would be fine fare for a book group discussion. Yet it could also satisfy a solo reader wanting an entertaining puzzle set in rite-of-passage territory. And it’s a book with more than enough ‘relatable’ content for a young adult readership.