And the Neddy goes to… 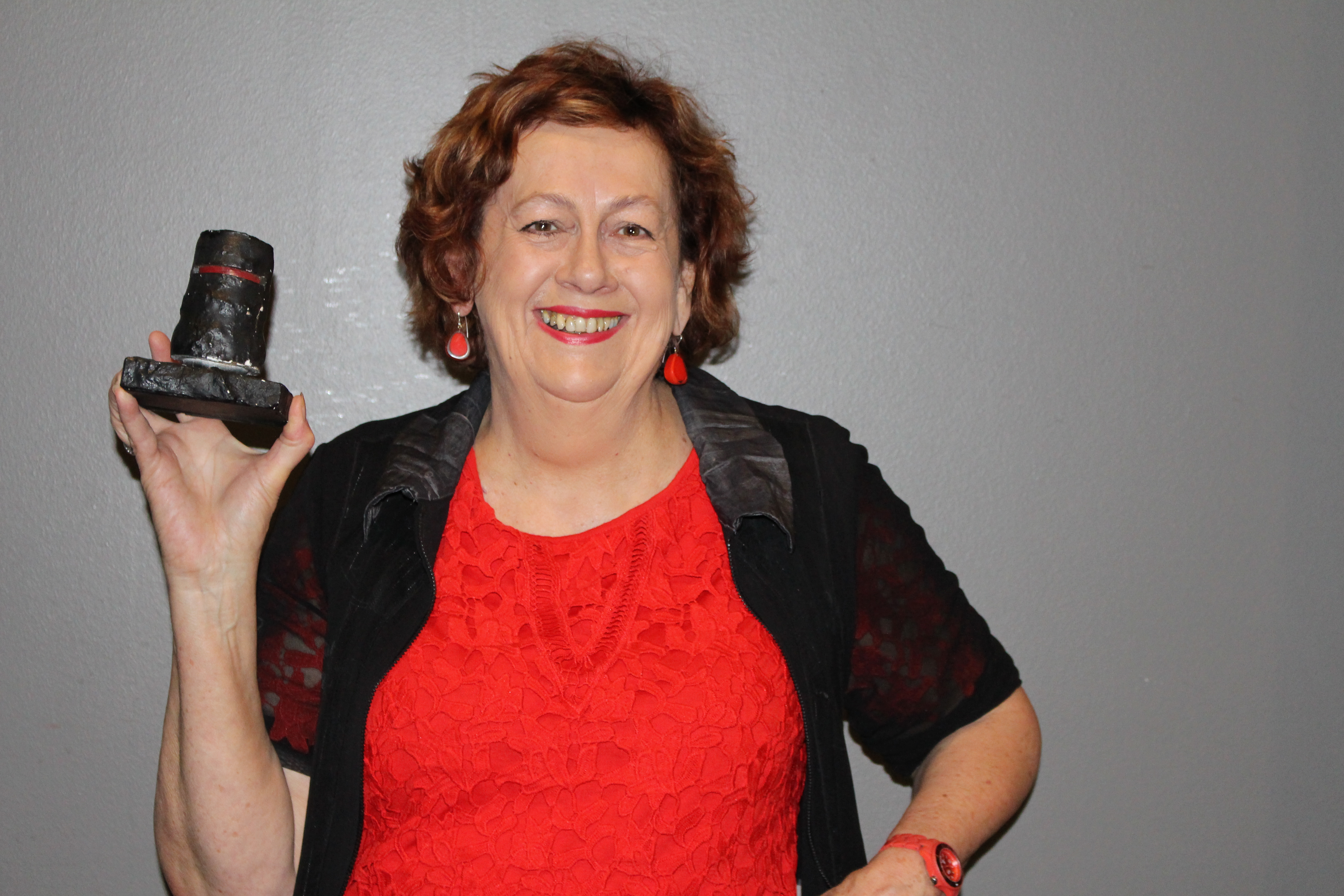 The Neddy for Best First Fiction went to Emma Viskic which made it a quadrella for her novel Resurrection Bay, after winning three Davitt Awards the previous night.

The Ned Kelly for Best Fiction went to Dave Warner for Before it Breaks; and for Best True Crime, Gideon Haig for Certain Admissions.

The highlight for Sisters in Crime at the Ned Kelly Awards, however was the honour bestowed by ACWA on our very own Carmel Shute.

Fellow Sister, and National Co-Convenor, Lindy Cameron, was asked to present the award on behalf of ACWA. This is what she had to say:

Once upon a time – back in the middle of last century – a little girl in a tiny Queensland town earned enough money writing to the children’s pages of the Gympie Times to buy her very first book.

This does not mean her childhood, until then, had been devoid of literature. For – while it is true that Brooloo didn’t get electricity until 1965 – this little redhead grew up surrounded by the books beloved by her mother and schoolteacher father.

BUT her decision, at the tender age of nine, on just how to spend that 9/6 created a monster –  of the kind that no doubt inhabits every person in this room.

It’s ok though – apparently it’s not hoarding if there’s a good Latin word for it.

Unbeknownst to that fledgling bibliophile however – the book she chose unleashed a different kind of demon.

For – as every girl (and a few boys) of a certain age can testify – it’s a truth universally acknowledged that a woman in possession of the Famous Five grows up to live a life of mystery and crime.

Sure she’s got a degree in history, was a member of the Communist Party, a union organiser at the ABC, and spent too many years writing speeches and media releases for people who couldn’t write their own…

BUT all of that was done purely and simply to earn money to feed her addiction.

From Enid Blyton in 1964 to Emma Viskic in 2016, Carmel Shute has nourished her very soul with murder, mystery and mayhem.

She goes to bed every night with serial killers, cops and private eyes; her weekends are spent at crime scenes with dead bodies and in morgues with forensic specialists, and she holidays with sleuths and detectives as they chase clues and red herrings.

In the beginning – Miss Marple & Harriet Vane aside – most of the stories that brightened her days and nights were written by gentlemen about gentleman, by blokes about blokes, or dicks about dicks.

Until the late 1970s when something extraordinary happened.

There was a seismic shift in the world of crime fiction – no doubt provoked by a little thing called feminism; but is was a shift which transformed Carmel Shute’s life forever; and which, in turn, changed the lives of untold Australian readers and writers:

Suddenly, it seemed, there were women walking those mean streets – not as victims or femme fatales, but as cops and detectives and loner private eyes with their own empty fridges and bottles of bourbon.

By 1987 there enough modern women creating modern female crime fighters that Sara Paretsky, one of the godmothers of this new crime wave, helped form an American organisation to promote the advancement, recognition and professional development of women crime writers.

When Carmel visited North America in 1990 she interviewed some of her favourite crime writers – including Sara Paretsky, Katherine V Forrest and Sue Grafton – and in 1991 produced a documentary for Radio National’s feminist program, the ‘Coming Out Show’ about Sisters in Crime in the US.

During that program Carmel, somewhat innocently, offered to send listeners a copy of a feminist crime bibliography. As a result, the ABC was swamped with 176 calls and letters; a record for Radio National at the time.

As the aforementioned bibliography did not actually exist, Carmel joined forces with some like-minded friends – four in fact – to create that list and, more significantly, plot the formation of an Australian version of Sisters in Crime.

Carmel’s original Famous Five soon became the Excellent Eight and, with a tweak on the American organisation’s reason for being – that of a force for women writers – this small band of Melbourne crime fiction buffs formed an organisation for women readers of women’s crime and mystery.

In truth there were very few women writing crime in this country at the time – so anything else would’ve been difficult.

Sisters in Crime Australia was launched with a debate on Sunday 22 September 1991 at the Democritus Club in Carlton, as part of the Feminist Book Fortnight.

An audience of around 70 turned up to hear Carmel, Kerry Greenwood, Alison Littler and Mary Anne Metcalf debate whether ‘feminist crime fiction confronted the hard-boiled head on’.

Forty women joined that day – and the rest they say is history.

Carmel is the only one of the Excellent Eight still standing – as a convenor of our fabulous organisation. But do not think for a minute it’s because she sold her socialist soul to cling to the reins of an organisation she helped build.

In fact, it’s probably because of the Red-red blood that runs in her veins, and the feminism that guides her every move, that this organisation has been the unqualified success it has.

Carmel is without doubt the heart and soul of Sisters in Crime; it is not a trite thing to say that without her drive and passion and hard work and yes – her sheer bloody mindedness – in working to achieve the goals we set for ourselves 25 years ago that we continue to do so.

We are a collective; a group of women who work for and with other women to enhance the standing of women who write the books we love; and ensure that whenever are wherever we gather to celebrate the sheer fabulousness of women’s crime writing that, above all, we have fun.

In retrospect I now see one of Carmel’s great strengths is finagling people; luring willing flies into her web of intrigue and mystery; getting us to not only join in but volunteer – for life.

I was there at the Democritus Club in 1991. I didn’t know anyone else there that day and although I’d never joined anything in my life, I became a Sister in Crime because it looked like fun. A few events later, I tentatively put up my hand to help produce the Sisters’ newsletter; then, lo and behold, a couple of years later I found myself again unable to say no to Carmel, when she invited me to be a Convenor. And here I am on this stage – one-month shy of 25 years since that gathering at the Democritus Club – a founding member, still a Convenor and now Vice President, and celebrating the extraordinary person who did in fact change my life.

Being a reading member of Sisters in Crime for a quarter of a century has been a joy and a pleasure; being a female Australian crime writer supported by Sisters in Crime has been priceless; and being a Convenor of Sister in Crime alongside Carmel has been the best thing I ever volunteered for.

And, despite the love and time and energy that all current and past convenors have bled into our organisation over the years, most of us would agree that without Carmel we would not have achieved all that we have; in fact, without her, we may not even have lasted this long.

Carmel has a tendency, I believe, to accept people with open arms if they meet at least one of the following criteria: you have a worldview where the word Comrade is the synonym for mate; you’re a fan of any crime fiction – though a passion for women’s crime gets you a gold star; or you’re a Trekker.

In the case of the latter, it was discovered in 1996 that six of the then-nine convenors had to make it home from our regular planning meetings in time to watch the new series of Star Trek: The Next Generation. We not-so Secret Six, subsequently formed a sub-group of Sisters in Crime called Sisters in Space.

So forgive me for using a bit of techno-babble from a whole other genre and fandom to finish up.

It is my great honour to present on the Australian Crime Writers Association Lifetime Achievement Award to Carmel Shute – the Warp Drive of Sisters in Crime Australia.