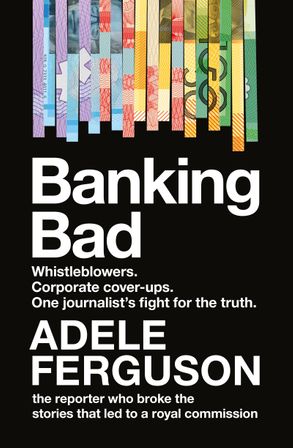 Against all the odds, Australia held a royal commission into the banking and financial services industries. Its revelations rocked the nation. Even defenders of the banks were blindsided.

Few people were more instrumental in bringing about the commission than journalist Adele Ferguson. Through her exposes in print and on television, she pursued the truth about funds mismanagement, fraud, lack of probity, and the hard-sell culture that took over the finance industry after deregulation in the 1980s. But it wasn’t just light-touch regulators and crooked bankers growing fat on bonuses she put under the spotlight. It was also their victims – men and women who had lost everything, and had no recourse when they discovered empty accounts, egregious fees, forged documents and broken promises.

Now in Banking Bad, Ferguson tells the full story of the power imbalance, toxic culture and cover-ups. She describes the long fight for justice by whistleblowers, victims and political mavericks, and she looks at the outcomes of the royal commission – the falls from grace, the damaging hubris, the scathing assessment of the regulators, and the colossal compensation bill – an estimated $10 billion.

Finally, she asks whereto from here? In May 2019, the Coalition government, which resisted calls for a royal commission, was re-elected. Bank stocks surged and lending regulations were loosened. Will it all be business as usual from now on, or have our financial executives learned that their wealth cannot come at the expense of ordinary Australians?

This is a book for every person with a bank account.

Banking Bad by Adele Ferguson showcases her deep research and thorough knowledge about mass financial crimes in Australia for several decades. Despite being a true crime book, it reads like a frightening thriller. Ferguson uses great empathy and skill to explain the injustices and dishonesty that impacts every single Australian household not just in the past or at the time that these crimes were committed but that will continue to cause harm for generations to come. The bad behaviour by financial institutions and their advisers saw people lose their homes, whittle away their superannuation and generally destroy the trust and confidence in our financial system. An important and outstanding book!