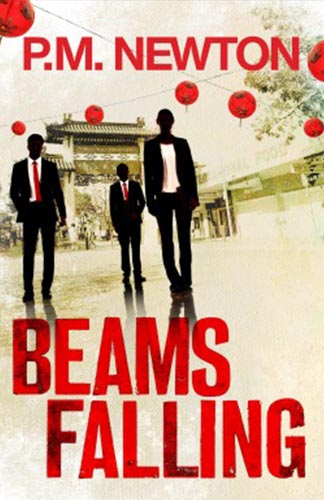 Author: P.M. Newton
Publisher: Penguin
Copyright Year: 2014
Review By: Angela Savage
Book Synopsis: Beams Falling is a powerful book that explores trauma and its legacy in the guise of a police procedural.

The central character is Detective Nhu ‘Ned’ Kelly, the child of an Anglo-Australian veteran and his Vietnamese wife who were killed in front of their children, their murders unsolved. Ned first appeared in Newton’s award winning debut, The Old School,set in 1992, where her part in the investigation into bodies found on a Bankstown building site puts her on a collision course with ICAC (Independent Commission Against Corruption) police corruption inquiries.

Beams Falling is best read as a sequel, rather than a standalone. It opens with Ned dealing with the consequences of having been shot at the end of the previous book, her wound ‘not yet a scar’. She is paranoid, hyper-alert, using whisky in a vain attempt to keep the nightmares at bay. Put on restricted duties, she finds herself transferred from Bankstown to Task Force Acorn, designed to investigate ‘Asian crime’. Ned has been deployed to boost the number of Asians on the team, her superiors oblivious to the fact that she doesn’t speak Vietnamese.

It’s 1993 and Sydney’s western suburb of Cabramatta, aka ‘Vietnamatta’, is the hub of the ‘Asian crime wave’ involving heroin, extortion, brothels and an army of disaffected teens caught between two cultures. Despite Acorn’s wide brief, all roads seem to lead to Cabra.

When a school boy is shot at point blank range in broad daylight, Ned becomes involved in investigating his death. But her reflexes are shot. She dives for cover and pisses herself during an assassination in a Cabra pool hall, and only the intervention of her colleague Joe Ng, seconded to Acorn from the Royal Hong Kong Police, enables her to escape with her dignity intact. But neither Joe nor her Bankstown buddy TC will stand by when Ned so clearly needs help. She is referred to a psychologist who puts her in group therapy to help her deal with the consequences of successive severe traumas and find a new normal.

Beams Falling is an atypical crime novel, absorbing, rather than fast-paced, as much a psychological study and slice of social history as it is a police procedural — all of which was part of its appeal for me.

While Ned’s trauma is at the centre of the novel, the book casts light on multiple other traumas, including those experienced by the Vietnamese who migrated to Australia in the 1970s: from the physical trauma of attacks at sea by pirates and the loss of loved ones to war and violence, to the psychological trauma of displacement and the loss of loved ones to other cultures and loyalties. Newton does this gently in the course of the story with evocative images and without preaching. The mother of the deceased at a funeral is described as ‘deboned by grief’. Refugee women are said to hear in breaking waves ‘the sound of lost husbands, children, honour, happiness, dignity.’

Comparisons with today’s asylum seekers are inevitable, the trauma of the refugee experience a constant in the midst of shifting geopolitics.

The NSW police force is depicted as a dysfunctional family, who ‘share nothing but secrets. Secrets that pressed behind the eyes like tumours.’ Everyone is flawed. Most are compromised, at times breathtakingly so.

Given the author’s 13 years on the Job, I don’t doubt the veracity of this depiction. But I am left wondering why Ned is so determined to remain a cop, when there is little light and virtually no humour to temper the unrelenting cynicism she encounters.

Beams Falling is intense, intelligent and provocative, the kind of novel that plays on my mind, long after the final page is turned.