Believing The Lie by Elizabeth George 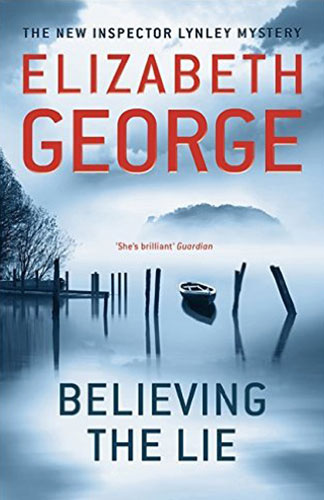 Author: Elizabeth George
Publisher: Hodder & Stoughton
Copyright Year: 2011
Review By: Sandra Nicholson
Book Synopsis:
The coroner’s verdict is accidental death. Ian Cresswell slipped, hit his head and drowned in the boathouse – a tragic accident. Ian’s uncle, business magnate Bernard Fairclough, is not so sure. To put his mind at rest, he requests the discreet involvement of Detective Inspector Thomas Lynley, not for a formal investigation, but for a confidential review of the circumstances of his nephew’s demise.

Still grieving for his murdered wife, Lynley has personal reasons for welcoming a spell away from London, and from his complicated relationship with Superintendent Isabelle Ardery. He heads to the wild beauty of the Lake District, with Deborah and Simon St James to provide cover for his enquiries. Barbara Havers, back at base, makes her own unique contribution to the case.

Bu each unhappy family is unhappy in its own way, and when he comes to know the various members of the extended Fairclough dynasty, Lynley finds many possible motives for murder, and uncovers layers of deceit and betrayal that expose the lies at the heart of the Cumbrian community.

Lynley is back on deck and has been invited by assistant commissioner, Sir David Hellier to meet him at his club in Portland Place. It is there he is introduced to Lord Bernard Fairclough, who asks Lynley to investigate the death of his nephew, Ian Cresswell. The coroner has declared it an accidental death but Fairclough wants a second opinion. Lynley agrees to do it with reservations, his main one being that he and Hellier do not share a trusting relationship. However, it is a good time for Lynley to have a break away from London for a number of reasons, the most pressing being his covert sexual relationship with his boss – a definite ‘career limiting’ move. The fact that the investigation is to take place in the Lakes District and that he is able to have his best friends Deborah and Simon St James join him is the clincher.

There are a number of sub-plots happening and the book starts out with one. It is the story of a young, unmarried Jewish journalist, Zed Benjamin, who is only a journalist because he can’t make a living writing poetry. He works for The Source, one of the ‘gutter press’ newspapers and he has an altruistic attitude in trying to turn the newspaper into one that reports human-interest stories. He is obviously not a good judge of character, as most readers will see from the outset that his boss’s only interest in people is how many buy his paper. We are left in no doubt that journalism is not Zed’s calling in life. There is also l love interest and an interfering mother. I found Zed and his part in all of this distracting and I could not see that it added anything to the plot, only to the length of the book.

Then there is the ongoing St James issue of Deborah no being able to have a child. Deborah became too much of a central figure and her role became a little far fetched at times for a professional. I also detected a little sexual tension between Deborah and Lynley, which given all his other problems, he didn’t need. He is losing his ‘goody two shoes’ persona, and whether it is intended or not, I’m not sure.

The relationship between Lynley and Ardery is fraught with danger and this tension is heightened when Lynley is told he must not tell anyone of his investigation, including Ardery, but is able to enlist the help of his team member, Barbara Havers. Ardery finds out, of course, and both Barbara and Lynley become targets of her wrath. Barbara is already a target for Ardery’s attention and has been told to spend some time and money on her appearance, with mixed results.

There is also a greater focus on Barbara’s neighbours, Azhar, his daughter Hadiyyah and Hadiyyah’s mother, Angelina, who becomes a central figure in yet another sub-plot, in this book. They are like old friends and it is always good to catch up with them to see what has happened in their lives. Barbara is a little put out by the return of Angelina but at the end it does create a tension that only another book will satisfy.

I was really looking forward to the return of Lynley but I found this book difficult to get into due to the number of sub-plots that really didn’t enhance the central story. However, I persevered and was rewarded with a fast paced sprint to the finish. There are distractions but the central story in which Lynley is involved is very good and worth the initial angst that it will never get there. I can only think that some of the sub-plots are teasers for future novels. Worth persevering with to the end.