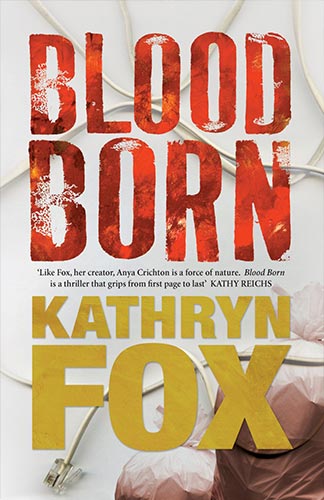 Author: Kathyrn Fox
Publisher: Pan McMillan
Reviewed by: Jacqui Horwood
Copyright Year: 2009
Book Synopsis: For pathologist and forensic physician Dr Anya Crichton, the death of a gang rape victim hours before she is due to give evidence at trial is a double tragedy. The violent Harbourn brothers, the girl’s accused attackers, now look like they will escape prosecution. But the Harbourns’ trail of destruction doesn’t end there. When two sisters are brutally assaulted and one of them is killed, Anya begins working round the clock to catch the Harbourns and nail their ringleader, the deviously clever Gary. With the help of Detective Kate Farrer and the surprise involvement of star litigator Dan Brody, she begins to discover just how twisted this family really is, and what they’re capable of. In Dr Anya Crichton’s most difficult case yet, she must piece together the evidence before a killer’s attention is turned on her…

In Blood Born, pathologist and forensic physician, Dr Anya Crichton, finds herself on the trail of a family of violent sex offenders. The Harbourns are a nasty group of psychopaths and liars and their story has echoes of 1998 Australian film, The Boys, and the more recent gang rape cases in Sydney. The Harbourn brothers are about to go to trial for the gang rape of Giverny Hart when Giverny is found dying in her home by Dr Crichton. Crichton had offered to take Giverny to court. In trying to save the girl’s life, Crichton misses clues as to whether it is a suicide or a murder staged as a suicide. After Giverny dies, the case against the Harbourns collapses and they are let loose. They then become prime suspects when two sisters are found stabbed and assaulted less than 24 hours later. One sister dies while the other clings to life in hospital. The subject matter of the book is upsetting and raw but it is a measure of Fox’s experience as a medical practitioner that the story never becomes sensational or voyeuristic.

Running alongside the main story is a subplot featuring defence lawyer, Dan Brody, who calls Dr Crichton after finding the skeleton of a baby under the floorboards of his family home. The ensuing story of family secrets parallels the main one nicely as well as playing on the unresolved sexual tension between Crichton and Brody.

The pace of this book is breakneck, and the exploration of whether the evil in this family is a result of nature or nature, and the frailties and inconsistencies of the justice system is fascinating. For me, the writing falls a little flat towards the end, particularly with the resolution of the sub plot, but ultimately this is an enjoyable and absorbing read.