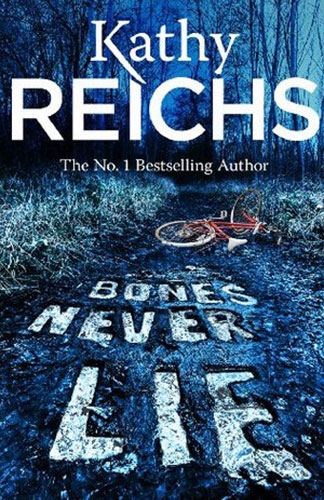 Author: Kathy Reichs
Publisher: Random House
Copyright Year: 2014
Review By: Ruth Wykes
Book Synopsis:
Tempe is faced with the horrifying possibility that the killer who got away in Monday Mourning is back…For a decade, Temperance Brennan has been haunted by the one who got away. The killer of young women. The monster. And the one who has now come back. Feeding on fear, grief and rage. Killing again. Killing girls. Getting closer. Coming for Tempe.

I have to confess I didn’t enjoy the last couple of Kathy Reichs books I read. I had begun to feel she was too influenced by her involvement in Bones (the ongoing TV series inspired by her books), and that the TV characters had negatively impacted her writing. I picked up Bones Never Lie, the 17th in the Dr Temperance Brennan series, without expecting much. I am delighted to say I was wrong; this is the best Tempe Brennan book Reichs has written for quite a few years.

In Bones Never Lie Tempe is called to the Cold Case Unit at Charlottesville to review evidence of a series of cases that relate to her old adversary, Anique Pomerleau. It isn’t long before the cases aren’t so cold and more bodies are added to the count. Perhaps this is where I should pop in a warning; if you don’t want to, or can’t read about children being murdered, this will not be a book for you. Teenage girls are being murdered and the cases are perplexing. What is the cause of death? Why is there very little evidence?

Meanwhile, it appears that Tempe’s on again/off again lover, Andrew Ryan has had a total meltdown and disappeared. The cold case team want him back, both for his experience as a homicide detective and his first hand knowledge of Pomerleau. Tempe wants him back too, but not for reasons that are immediately clear.

Bones Never Lieis a fast-paced psychological thriller. Once I realised that this was the Kathy Reichs of old I relaxed into the story. I knew she was telling me a great yarn, weaving intrigue and page-turning suspense into her story, and I resisted the urge to try and solve the crime before it was revealed by the author.

If you’re like me and had begun to wonder if Kathy Reichs might have reached the natural end of this story a few books back, take heart. She’s back, and she’s written a ripper.