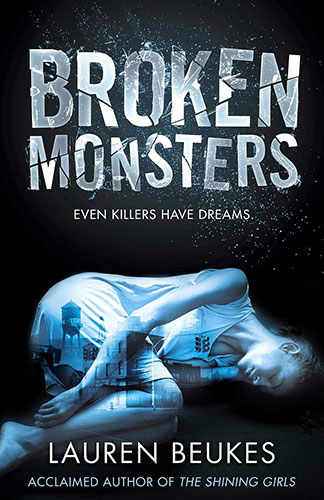 Author: Lauren Beukes
Publisher: Harper Collins
Copyright Year: 2014
Review By: Sue Turnbull
Book Synopsis:
Detective Gabriella Versado has seen a lot of bodies. But this one is unique even by Detroit’s standards: half boy, half deer, somehow fused together. As stranger and more disturbing bodies are discovered, how can the city hold on to a reality that is already tearing at its seams?

If you’re Detective Versado’s geeky teenage daughter, Layla, you commence a dangerous flirtation with a potential predator online. If you’re desperate freelance journalist Jonno, you do whatever it takes to get the exclusive on a horrific story. If you’re Thomas Keen, known on the street as TK, you’ll do what you can to keep your homeless family safe–and find the monster who is possessed by the dream of violently remaking the world.

South African writer Lauren Beukes (“rhymes with mucous”, the author cheerfully informed audiences on her recent Australian book tour), is a tad hard to pin down genre-wise. She is a former journalist who has written screenplays, graphic novels and a noir fantasy thriller (Zoo City) set in a reimagined Johannesburg that won an Arthur C. Clarke Award and an approving nod from William Gibson.

Her previous novel, The Shining Girls, featured a time-travelling serial killer against a backdrop of the depression and recent recession in the US. Stephen King liked that one.

Broken Monsters, her most conventional crime story thus far (it is almost a police procedural), is also the most original book in the genre I have read this year. As with Gillian Flynn’s Gone Girl, reading might render you breathless and even bewildered, but not in a bad way.

In whatever genre she writes, Beukes appears interested in how damaged people survive amid the ruins of whatever civilisation they find themselves in. Lest this sound too depressing, what lifts Beukes’ fiction is her sharp wit and nifty way with words, as well as her characters’ resilience and humanity.

The moral centre of Broken Monsters (although she is hardly beyond reproach) is occupied by Detective Gabi Versado, a single mother with a teenage daughter teetering on the precarious edge of adulthood. While Gabi deals with a particularly horrifying murder case involving the glued-together remains of a young boy and a fawn (inevitably coded Bambi in cop-speak), her daughter Layla and best friend Cas are “catfishing” for paedophiles on the internet.

The online world is already an extension of the teens’ lives and Beukes brilliantly captures their inhabitation of this new reality. However, what Layla and Cas discover is that while cyberspace might seem like their private playroom, with a Do Not Enter on the door to keep the parents out, it is not that safe.

Other key characters, who will each make their own hazardous way to the discombobulating conclusion, include one of those ruin-porn journalists drawn to Detroit in search of a Pulitzer prize-winning story in which he wants to play a key role. Jonno will get what he wished for, but at a cost. There is a lesson here, too.

And then there is Clayton Broom, artist and sculptor, hovering on the fringes of Detroit’s creative economy, which is unexpectedly flourishing between the cracks. There is something seriously broken about Clayton, too, but at last he appears to have found the inspiration he needs to create the art that will set him and everyone else free. His vision, like that of his creator, is at once scary and compelling. Discover it as soon as you can.

Thank you to The Age where this reivew first appeared on September 13, 2014.