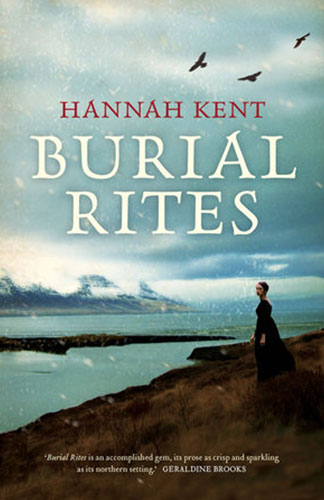 Author: Hannah Kent
Publisher: Picador
Copyright Year: 2013
Review By: Michaela Lobb
Book Synopsis:
In northern Iceland, 1829, Agnes Magnúsdóttir is condemned to death for her part in the brutal murder of two men. Agnes is sent to wait out the time leading to her execution on the farm of District Officer Jón Jónsson, his wife and their two daughters. Horrified to have a convicted murderess in their midst, the family avoids speaking with Agnes.

Only Tóti, the young assistant reverend appointed as Agnes’s spiritual guardian, is compelled to try to understand her, as he attempts to salvage her soul.

As the summer months fall away to winter and the hardships of rural life force the household to work side by side, Agnes’s ill-fated tale of longing and betrayal begins to emerge. And as the days to her execution draw closer, the question burns: did she or didn’t she?

During last year’s cold, grey and wet Melbourne winter, I had gone to bed early, snuggled up flicking through TV channels when I came upon Australian Story.

The episode was about a young Australian writer, Hannah Kent, who was just having her debut novel published about a convicted murderer, Agnes Magnúsdóttir, who became the last woman to be executed in Iceland.

I enjoy documentaries about writers and their writing process but this story stayed with me for days because I was left with the feeling that Hannah had in some way been haunted by Agnes. As if Agnes were reaching through centuries to whisper her story to the young writer, quiet but persistent, insisting it be told.

I made a note to get it when it was due to be released in May 2013 but in a flurry of changing jobs, buying a house and moving, I never got around to it. But then months went by and the title and author’s name began appearing everywhere and I realised it was ‘the’ book that I couldn’t quite forget about.

I finally got my hands on it and I wasn’t disappointed! However, I foolishly started the book during the week and it really irritated me each time I was forced to put it down to work or sleep. Although there were times when I did have the chance to read uninterrupted, that I had to look up and look away, take a breath and bring myself back to my present day because the sadness the book was evoking was palpable.

There is no judgment in Burial Rites, nor any attempt at vindicating or justifying Agnes or the verdict set against her.

Two men, one of whom was Agnes’ employer, were murdered. Three people (one man and two women) were tried and found guilty and two of those people were sentenced to death. Agnes was one of those told she must die, the older and plainer of the two women.

Hannah Kent’s beautiful prose is deftly used as she peels back layers of time and history to reveal a story of a misplaced, lonely, doomed woman and the farming family forced to take her in as she awaits her sentence of beheading.

This is in many ways a simple story, telling an imagined version of what could have happened as Agnes and the Jonsson family struggle to survive during the last few months of her life in their harsh, wintry and bleak Icelandic environment.

Death for these people is a constant shadow in every room; dying babies, Mother’s illness, the yearly slaughter of animals killed to make it through Winter. But the arrival of Agnes brings that shadow into certainty, death was now a sentient being in their home, each day counting down to Agnes’ last.

This debut novel is so raw and poignant, that I had to keep reminding myself that only the core facts were ‘real’ and that everything else came from within the writer.

Hannah Kent has thoroughly researched documents from the trial and others that were written at the time. Hannah visited the surviving landmarks and spent time where Agnes both lived and died, going where Agnes was at the end taken and beheaded.

Hannah has used all of this research to create strong foundations for her novel but it is her empathy and skill in telling tales that has made Burial Rites the deserved award-winner and success that it is.