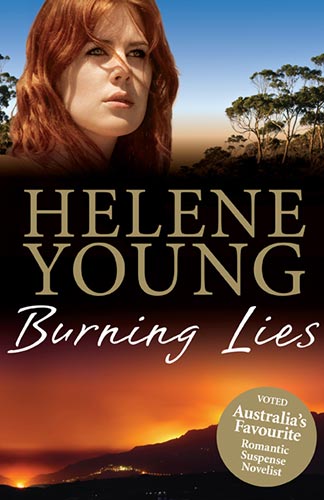 Author: Helene Young
Publisher: Michael Joseph – an imprint of Penguin Books
Copyright Year: 2012
ISBN: 978-1-921901-22-5
Review By: Virgnia Jane Rose
Book Synopsis: It’s easy to see why Helene Young was voted Australia’s favourite romantic suspense novelist in 2010 and 2011 – Burning Lies truly is “an explosive story of peril and passion”, and the relationships between the characters are as engaging as the suspense thread of the story.

This is one of those fat, brightly covered books, with the author’s name in huge gold type, that I might not have picked up without being asked to review it, and I would have missed out on an exciting and satisfying story that also gives a fascinating view of the world of women and men working in aerial surveillance in Australia’s tropical northeast. Author Helene Young works as a senior captain flying for a major east coast regional airline which means that she can share a lot about a world that is open to very few people, and she is also a very accomplished writer, building her romance and suspense with verve and skill.

As with most murder mysteries, the structure of the story demands some misleading of the reader in the early stages, so as not to reveal too much too soon of the devious and dastardly motivations behind the actions of the person who turns out to be the villain, but this is all part of the game for writer and reader.

Another nice thing about this book is that the heroine, while she is naturally gorgeous and accomplished, does have real, everyday problems to wrestle with as she worries about being a good mother while she has to work long shifts away, leaving her own very capable but aging mother to care for her grandson on their isolated country property which they have built as a fortress against bushfire that has never been tested. When the fire does come, it is touch and go.

The love story also deals in real human vulnerabilities and hopes and fears. Another plus for me is that the sexual relationship between the lovers is made easy to imagine, without losing it’s power by being spelt out in dull physical detail. Burning Lies is a very satisfying read that lingers in the mind.