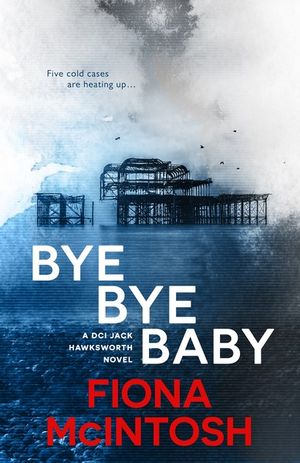 A spate of seemingly unconnected murders in southern England prompt a high-profile taskforce to be formed and led by DCI Jack Hawksworth, one of the Force’s new rising stars who combines modern methods with old-school instincts.

The victims appear as disparate as their style of death; the only link that Hawk and his team can pull together is that the murdered are all men of an identical age. The taskforce has nothing but cold cases of decades past to comb through in the hope that they might find a clue to who is behind the savagery.

A heart-stopping tale of brutal revenge with a chilling twist by a powerhouse Australian author.

Bye Bye Baby is a murder mystery set in and around London in 2003.

A serial killer in on the loose — the victims, all male, are drugged, the bodies emasculated, with the lips removed – leaving them with a permanent smile. Each body has a single stab wound to the chest, and a particular shade of blue paint daubed on the face.

DCI Jack Hawksworth is in charge of the case.  Handsome, intelligent and ambitious, Jack also has something to prove after a previous affair with a colleague indirectly resulted in the death of an officer.

At first, the police can’t find a link between the victims apart from their similar ages.  But as the investigation continues, details of a terrible crime committed many years before comes to light, leading the police to change their perspective of the whole case.

Meanwhile, Jack finds himself falling for a beautiful, wheelchair-bound, woman who resides in his building. Jack’s attractions causes tension between him and DI Kate Carter, who is in love with him despite being engaged to someone else. This makes for some tense scenes between the two, especially as the case heats up and Kate’s feelings get in the way of her judgement.

Most of the story is told in third person point of view, but the killer’s story is told in the first person – making for an interesting and suspenseful read.  As the story unfolds and the full scale of the decades old crime is revealed, any sympathy you might have had for the victims is lost. Despite the gruesome nature of the killings, I found myself rooting for the killer to get away with it!

The story is a fast paced, enjoyable read, with an exciting climax and a nice little twist at the end.  At around 500 pages, the story never flags, and I liked the touch of romantic suspense as well.  I have several of Fiona McIntosh’s other novels (women’s fiction, I suppose you’d call them), but until I received this book for review, I wasn’t aware of her other talent as a crime writer.  I will definitely be checking out the second DCI Jack Hawksworth novel, Beautiful Death.