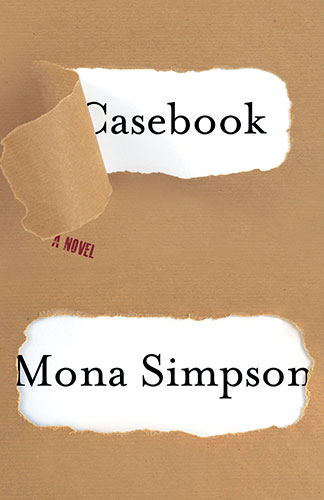 Author: Mona Simpson
Publisher: Constable & Robinson Ltd (Random House)
Copyright Year: 2014
Review By: Suzanne Bozorth-Baines
Book Synopsis:
Nine-year-old Miles Adler-Hart’s mother, “the Mims,” is “pretty for a mathematician.” Miles and his best friend Hector are in thrall to her. When her marriage starts to unravel, the boys begin spying on her to find out why. They rifle through her dresser drawers, bug her telephone lines, and strip-mine her computer. Ultimately, what they find will affect the family’s prosperity—and sanity.

Burdened with such powerful information, the boys struggle to deal with the existence of evil, and proceed to concoct hilarious modes of revenge on their villains. Casebook brilliantly reveals an American family coming apart at the seams and, simultaneously, reconstituting itself to sustain its members through their ultimate trial.

Mona Simpson isn’t a stranger to American awards for her writing, and she has encountered mysteries within her own family. Her biological brother is Steve Jobs. They met and became good friends after Steve, an adopted child, searched out his biological parents in the 1980’s. Mona and Steve biologically shared both father and mother, but had never met. So it doesn’t seem unusual for her to write a book about family life and a boy looking into the ‘mysterious’ workings of his parents’ relationship.

The story of Miles and his friend Hector eavesdropping on his parents’ conversations doesn’t seem like much of a crime. Their amateur sleuthing doesn’t fit the bill either. As a matter of fact, one has to ask, why has this been classified as crime fiction at all? This book is really a coming of age novel, with Miles learning the inner workings of love, familial relationships, sexual attraction, and friendship, albeit through his sleuthing.

Simpson’s writing is reasonably straightforward, understandable, and humorous. There were times when I laughed out loud at the antics and description of the family, their friends, and the inner workings of all the relationships. However, I did feel that the print was very small (perhaps to make it a 300 page book rather than a 400 pager), and there were times when I wondered why the book couldn’t have ended sooner. Was this because I kept looking for the crime or the real mystery promised, and I was exasperated with not finding it? The not-so-straightforward writing technique was the addition of asterisked sentences occasionally at the bottom of pages, like footnotes. I had a fleeting thought that the mystery would be that Miles had a dual personality, and this was the manifestation of it. Finally, at book’s end you find out why these have emerged. A few little drawings appear in the book, which neither distract nor add greatly to the content.

All in all, Simpson has written a book that has merit, as long as its classification isn’t crime.