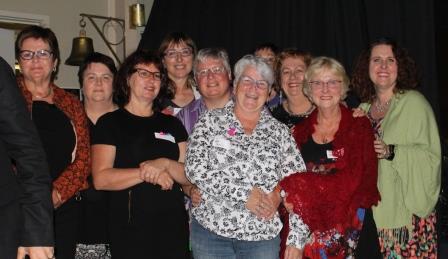 Over a hundred people from all over Australia came together on Saturday 8 April at Melbourne’s  St Kilda Bowling Club to celebrate the life of Vivienne Colmer. Vivienne, who was Sisters in Crime’s first Life Member,  became its second President in October. She sadly died of cancer in January.

Vivienne, who was born in Khartoum in 1955, led a rich life, greatly admired – and loved – by a wide circle of friends, family, work colleagues, trade unionists and, of course, her Sisters in Crime. Margret RoadKnight and Fiona Boyes and band ensured that Vivienne’s life was celebrated in style.

National Co-convenor, Carmel Shute, was a long-time friend, colleague and Sister in Crime,  was one of many speakers. Her speech follows: 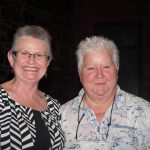 When I first met Vivienne Colmer back in 1989, I was immediately struck by her two big attributes… her big brain and her big phone. It was hard to say which was bigger as her phone, one of the early models of mobiles, was like a brick and took up half her handbag.

A mobile phone was one of the early status symbols in the newly-formed Public Sector Union which I worked in but in Vivienne’s case it wasn’t just a power fashion statement. She gave that phone a huge workout but all in a good cause – the protection of the ABC and the betterment of its workers.

The National Secretary, Peter Robson, had the bright idea of proposing Vivvie to become the ABC National Officer. Sydney officials from the ABC – Mark Aarons, from the Royal Family of Australian Communism, and John Cleary from Religion and the radical wing of the Salvation Army – invited about 15 of us from around Australia to interrogate Viv. And that’s what we did.

The room was so crowded that Viv had to perch on the edge of a desk. She managed to survive 2 hours and then we started to head out for dinner, I asked her what she did for pleasure. She confessed that she was madly passionate about… wait for it … crime novels.

Well, she had me then. She had everyone else as we drank a lot of red wine over dinner. Viv was woman who really knew how to party. 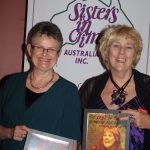 So Viv become the ABC National Officer and was soon immersed into industrial relations ABC-style – we were either in bed with the ABC campaigning against the Federal Government over ABC funding or we were at war with it over staff cuts and redundancies.

Viv was immediately involved in some disputes such as the shift of the ABC headquarters from Darlinghurst to Ultimo in Sydney and the introduction of touch screen technology but it wasn’t until 18 months later that she led what we still call the Big Dispute.

The Big Dispute – which involved about 100 times more industrial action than had occurred in the previous 59 years of the ABC – arose out of generalised dissatisfaction. Members were sick of year of cuts under Labor… yes Labor [Labor in government hates the ABC almost as much as the Liberals]. They were sick of management saying they were going to get rid of the dead wood, sick of the casualisation of their labour but, as Viv and I and others have discussed, it’s hard to pinpoint any one thing.

Ultimately, the Big Dispute was about protecting what the ABC stood for, as well as trying to protect jobs and conditions and to stem what appeared to be a crushing tide of casualistion.

The Big Dispute had so many amazing moments:

Through all of this, Viv exercised outstanding leadership and negotiating skills. The upshot of it all was a very good employment agreement which kept casualisation at bay for almost a decade.

She later successfully lobbied Canberra to get rid of the efficiency dividend and helped persuade a Senate Inquiry to guarantee the ABC’s funding.

The NSW ABC union organiser, Lynda Boland, wasn’t able to come tonight as she is Brisbane for her mother’s 104th birthday and sent this message:

“Viv and I were great pals in the years we worked together to defeat ABC management bastardry. Those tough times – where we regularly broke unjust laws – forged a bond of friendship and understanding between us and gave union members confidence that we would go all the way to win their just claims. She was a great communicator and leader.”

So when Viv left the ABC in 1995 to lead the union in the CES she thought she was leaving it in a good state. Errol Simper, the media reporter for The Australian, wrote an admiring article entitled “Goodbye to a Guardian”.

However, then of course Howard got elected and did his best to destroy the ABC and so many other important institutions.

Viv stuck it out as the CPSU Employment Secretary for around four years, eventually moving to Melbourne. She and Richard Fields ended up buying two flats –Richard upstairs and Viv downstairs. They’d met during the Big Dispute when he was heckling down the back of a meeting and denouncing the union officials for selling out the workers.

Lest this sound like a paid advertisement for Viv’s virtues, of which there are many, I do have to draw attention to her ability to create a shockingly messy office. When she left the CPSU, the union had to employ a professional archivist, not least because a big case rested on getting her documents in some sort of working order.

I do have some sympathy because at the ABC – and I know this was also the case at the CES – we lurched from one crises to another. There was never time for filing, even if one was that way inclined. Viv always said it was why she liked crime novels – they created order out of chaos and there was a resolution at the end.

Viv’s passion for crime writing led her to becoming a convenor of Sisters in Crime after she didn’t renominate as the Employment Section Secretary in 1999. 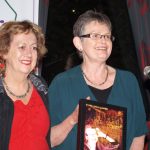 It was a great boon for the Sisters as she brought her considerable organisational skills to our 10th anniversary convention, SheKilda, in 2001. Amongst many things, she negotiated to bring our international guest speaker, the Tart Noir Queen, Lauren Henderson, out from New York. It all become a bit hairy for a while because of 9/11 and then the collapse of Ansett.

Viv became Sisters in Crime’s first Life Member and, of last October, its second President. She gave an outstanding welcoming address at our 25th anniversary convention SheKilda3 at St Kilda Town Hall and had great plans for the organisation.

Despite the pain and fatigue, she looked pretty damned good. We all loved her short hair and wonderful outfits.

In my last conversation with Vivvie at the Alfred on 11 January she was planning to come to the convenors’ national planning day on 4 February but a few days later she had left our world. 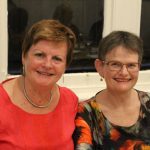 At Sisters in Crime’s March 3rd event we planned to have a minute’s silence but fellow convenor and old friend and colleague, Ann Byrne, decided that Viv would much prefer us to make a lot of noise and that’s what we did. We cheered and yelled. We did not believe that Vivienne “should go gentle into that good night into that good night”. I am sure you don’t either.