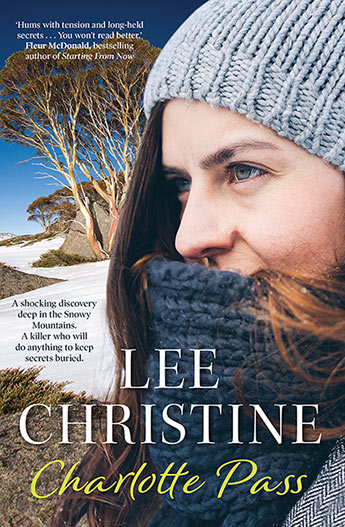 Arriving in the isolated, snowed-in village with Winterfest celebrations underway, Ryder soon determines that the bones are those of Celia Delaney, a young woman who disappeared from the ski resort in 1964 during the biggest winter storm in Australian alpine history.

When a second murder takes place, Ryder suspects that the deaths are related, and that the person responsible is still in the village. Amid the escalating tension Ryder is desperate to make an arrest before the stakes rise even higher.

Set within the stunning Snowy Mountains, this intriguing mystery uncovers deadly, long-buried secrets in the valleys and mountains of this iconic area.

With a story set in a ski resort, readers would expect the setting to be almost a character in itself, and this is the case in Charlotte Pass. The author brings to life the snowy expanses of the Alpine countryside and the claustrophobic feel of the dormitory conditions of the workers’ accommodation where ski patroller Vanessa Bell resides during the winter season.

Vanessa’s skills make her the perfect person to help Detective Sergeant Pierce Ryder navigate not only the workings of the resort but the nuances of an eclectic bunch of people who come together once a year to cater to the guests’ needs. She is resourceful and empathetic, not afraid to make decisions that might put her in the bad books of the resort owners, and confident to go after what she wants. And Pierce Ryder soon becomes one of those wants.

A tragedy in Ryder’s past has seen him become the kind of cop whose focus and determination is unrelenting, but memories keep surfacing and threaten the feelings he starts to develop for Vanessa. It isn’t long before her caring nature allows him to reveal the demons of guilt he can’t expunge.

Like the now-exposed bones from fifty-five years ago, long-buried secrets come to light as Ryder’s investigation progresses. The annual Winterfest has seen the return of not only the husband of the dead woman and his band but also Aidan Smythe, whose dream of becoming a world-champion skier began on these mountains. As his investigation reveals the secrets of their private lives, Ryder learns that fidelity and trust were in short supply during the early years of the resort.

A second murder affects Vanessa deeply, and gives her an insight into the dangerous world Ryder works in. Fearing for her safety, she accepts Ryder’s offer of protection, but this brings her even closer to the killer who needs to cover his crimes at all costs.

Clues are well-laid, and the suspense varies from simmering to intense as the story unfolds.

This novel has all the right elements of a romantic suspense, with a big slice of police procedural, and will more than satisfy readers of those genres.

Crackenback, book 2 in the series, was out early February and we hope to review it soon.