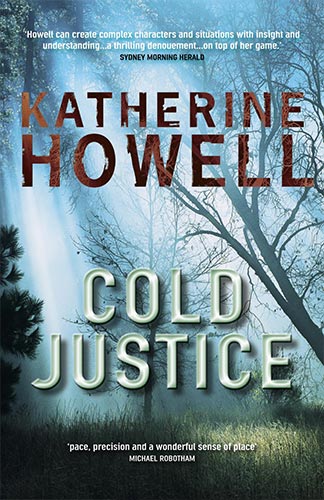 In Cold Justice, Katherine Howell’s wonderful Detective Ella Marconi has just returned from injury to active duty. She finds herself in the Unsolved Homicides unit and is welcomed by the unit boss with what is his usual line to new members – “The past haunts the present”. As Ella and the various characters in this enjoyable book discover, you can’t outrun your past.

Ella is charged with reinvestigating the murder of a young school boy, Tim, nearly two decades prior. The more she digs, the more she discovers that knowing can be as bad as not knowing. Tim’s traumatised mother seems to be hampering the investigation while Tim’s cousin now an MP is doing everything he can to get the case reopened. Complicating matters for Ella is her relationship with fellow police officer, Wayne, and his insistence on her maintaining a work/life balance.

The story is also told from the points of view of Georgie and Freya. Georgie was the one who discovered her school mate Tim’s body. She’s since become a paramedic and is in Sydney to be reassessed for her job because of problems she’s had in her country station. From Georgie, we learn how devastating bullying can be in the workplace and how psychologically traumatising her job can be. The person reassessing Georgie is Freya, who had been Georgie’s best friend at school and then disappeared without a trace after the discovery of Tim’s body. Freya is not happy about seeing Georgie again after all these years and is terrified about past secrets being uncovered.

Interspersing the drama are Howell’s familiar vignettes of life as a paramedic which gives the book immediacy and authenticity. Cold Justice is a well paced and tightly written look at how the past impacts on the present.

Jacqui Horwood
In this, the third in Katherine Howell’s series about Detective Ella Marconi, we find that Ella has recovered from a serious gunshot wound received during her last case and, on returning to work, has been assigned to Unsolved Crimes.

She is given the file of Tim Pieters, a teenager murdered in 1990, whose body had been found by his classmate, Georgie Daniels. Tim’s cousin, a child at the time, is now an MP and has managed to have the case re-opened.

Ella tracks down Georgie, a paramedic who has had her own problems. In an attempt to leave them behind and start life afresh, she has received a transfer and will be assessed on her performance by her new partner, Freya.

The story moves effortlessly between Ella, as she painstakingly reviews the evidence gathered at the time of the murder and re-interviews those most closely involved, and Georgie as she tries to settle into her new role and cope with the terrible memories revived by the fresh interest in the case.

Among the many questions facing Ella are why Tim’s mother is so antagonistic and whether Georgie knows more than she is telling. Georgie wonders whether the problems she thought she had left behind have in fact followed her or whether she is becoming paranoid. She also worries that her assessment may be affected by the fact that Freya had also been a classmate of Tim.

It is no wonder that this well-crafted novel won the Davitt Award for Best Novel of 2010. It is also important to note that it is unnecessary to have read the two earlier novels in this series. Although be warned that if you haven’t done so, you will no doubt want to track them down and also look for the two new forthcoming titles from this talented author.