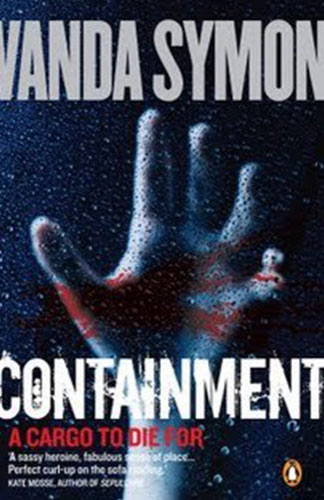 Author: Vanda Symon
Publisher: Penguin
Copyright Year: 2009
ISBN: 9780143202295
Review By: Karen Chisholm
Book Synopsis:
Chaos reigns in the sleepy village of Aramoana when shipping containers wash up on the beach and are looted.

Detective Constable Sam Shepard knows first-hand the desperation of the

scavengers- she’s got the scars to prove it. Plus a skull in the sand.

And a body pulled from the ocean. The undercurrents from one morning’s madness are far-reaching. Who else will be caught in the backwash? Can Sam stem the tide?

CONTAINMENT is the third in the Sam Shephard series from New Zealand writer Vanda Symon. It’s rapidly stepped up to be one of my all time favourite series for a whole bunch of reasons.

Firstly these are truly humorous books. Subtly, ever so slightly tongue in cheek, the humour is both self-deprecating and tension alleviating.

My favourite sort. Sam’s voice is particularly appealing – as she busily beats herself up mentally, leaving the physical assault to the scavengers on the beach in the case of CONTAINMENT. As mentioned in earlier reviews – because the books are told from Sam’s point of view, her self-deprecation and self-analysis is part of what alleviates any sense of myopia or self-servitude that can sometimes occur with that viewpoint.

Secondly they are solid, believable, twisty and nicely complex plots.

They are particularly believable and realistic in the setting in which the action takes place. Symon’s small town or country New Zealand is a place where the crimes, the perpetrators, the cops and the victims all fit perfectly. Often the action starts out small-time and stays that way, in other cases things escalate rapidly, frequently slightly out of control and mostly inexplicably until everything just explodes around the cops and perpetrators ears!

Lastly, but not least of all, there are great characters in these books.

The stand out is obviously Sam Shephard herself. The country cop who has moved to the bigger city, but not lost that practical, self-deprecating, country sensibility. Her awareness (and willingness to beat herself up) for her shortcomings, her understanding and forgiveness and care for those who surround her is .. here’s those words again .. realistic and believable. Sam is definitely the sort of cop that you can well imagine running into at a crime scene, at the pub, in a hospital bed. Because she is a little accident prone. Mostly because of enthusiasm and concern for the job, partially because of a stubborn refusal to think things through totally, Sam spends more than a bit of time in her own physical or mental wars. Just to add to the mix, the course of true love gets smacked around the head pretty regularly by Sam, and the bosom of her loving family has it’s own twists and turns.

Whilst Sam is definitely the star of her own show in these books, the supporting cast isn’t one dimensional or off-camera. Her interactions with the other cops in her team, her boss, her parents, cop boyfriend and best friend Maggie are very good. Particularly her relationship with friend, flatmate and voice of reason Maggie. It’s actually a fantastic element of these books – to have a strong, supportive and brutally honest relationship between two women drawn so clearly is a relatively rare occurrence, and it’s done extremely well in these books

– although Maggie is possibly slightly less present in CONTAINMENT than I recall her in the earlier books.

For all the gushing of this review, these books aren’t just light-hearted entertainment. There are often elements in the plots which are unexpected, unpleasant even – characters that are expendable, deaths that are confrontational or emotional. The light-hearted touch of Symon doesn’t conceal the reality of criminal activity, murder or mayhem. It just makes the lesson slightly more palatable.