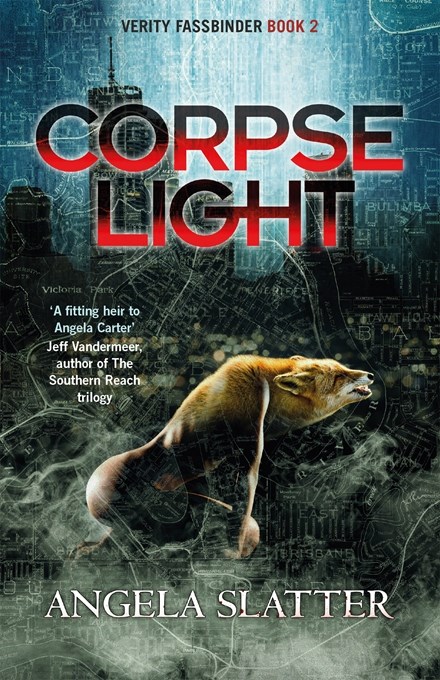 Verity’s all about protecting her city, but right now that’s mostly running surveillance and handling the less exciting cases for the Weyrd Council – after all, it’s hard to chase the bad guys through the streets of Brisbane when you’re really, really pregnant.

An insurance investigation sounds pretty harmless, even if it is for ‘Unusual Happenstance’. That’s not usually a clause Normals use – it covers all-purpose hauntings, angry genii loci, ectoplasmic home invasion, demonic possession, that sort of thing – but Susan Beckett’s claimed three times in three months. Her house keeps getting inundated with mud, but she’s still insisting she doesn’t need or want help . . . until the dry-land drownings begin.

V’s first lead in takes her to Chinatown, where she is confronted by kitsune assassins. But when she suddenly goes into labour, it’s clear the fox spirits are not going to be helpful.

Set in Brisbane, Corpse Light begins with a short prologue, introducing the reader to the main crime of the novel as the victim, lawyer Susan Beckett, arrives home to find foul-smelling muck smeared throughout. There is the merest hint of paranormal activity at play in the precautions Beckett takes to try to prevent another recurrence, precautions sourced at the local ‘spook shop’.

Slatter is careful to win over her crime-fiction readers in the first pages of the opening chapter, with protagonist, detective Verity Fassbinder, at home with her husband preparing for the arrival of their first child. In the pages that follow, Slatter introduces the dark fantasy element with assured naturalism, the reader invited to accept as real the Weyrd realm that exists alongside human reality. The Weyrd realm is akin to counter-culture, a fringe reality lending Corpse Light a satisfying Noir feel: urban, gritty, edgy.

Corpse Light is the second in the Verity Fassbinder series and Slatter handles the necessary catch up with finesse. There is little need to have read the predecessor, although the reader will be forgiven for wanting to.

The plot unfolds by increments, the main crime supported by other, seemingly lesser crimes, the reader compelled to turn the pages to discover how the various plotlines are connected. There’s a delicious sense of danger and fascination as the story unfolds, with plenty going on to keep the reader entertained and a good balance between crime solving and the domestic life of the protagonist.

The protagonist, Verity Fassbinder is well-crafted and memorable. She’s likeable, intelligent and rebellious, a risk taker. Supporting characters are adequately fleshed out and believable, if a touch two-dimensional, the result of the dominance of Fassbinder herself, a somewhat hard-boiled narrator who tends towards self-absorption. Yet through Fassbinder’s eyes, the narration is witty, adroit, a fine example of good crime storytelling.

Slatter’s descriptive prowess is evident in her crafting of Weyrd characters and the world they inhabit. This reality is so well-realised the reader will soon believe, for the duration of the novel at least, in the existence of Weyrd.

The pacing leans towards the fast side of fiction, tempered by detailed and witty descriptions of setting as Fassbinder finds herself in one location after another and takes in her new surroundings with a sharp, critical eye. In this fashion, Brisbane and Weyrd Brisbane are brought to life in the mind of the reader. The pregnancy and its aftermath are handled convincingly, the author clearly knows or has researched early motherhood, and the inclusion of the theme adds to Corpse Light a pleasing juxtaposition and suspenseful vulnerability.

Slatter handles the fantasy dimension well, but Corpse Light is foremost a crime novel and as long as the non-fantasy reader is able to suspend judgement on the existence of witches and sprites and elementals and other creatures inhabiting a parallel reality we can partially see, then she will find Corpse Light an entertaining read. Ultimately, Slatter gives readers in both genres what they are looking for in a good novel.