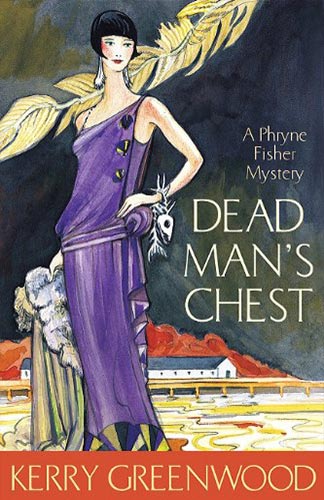 The eighteenth novel in Kerry Greenwood’s series about Phryne Fisher sees the titled private investigator on holiday in the Victorian coastal town of Queenscliff. Even before Miss Fisher and companions arrive at their destination, they run into trouble.

Phryne was getting out of the car. Dot closed her eyes. Miss Fisher was about to happen to someone again. She hoped that Phryne wouldn’t get blood on shoes. That glacé kid was a beast to clean.

What follows is a tale of kidnapping and mayhem among a lively cast, including a gaggle of surrealists, a trio of local yobs and a film crew in town to make an adventure movie about the legendary brigand Benito and his hoard of gold. When the normally sedate seaside town becomes an extended crime scene, Miss Fisher faces it all with aplomb.

After an energetic opening, the novel proceeds at a more leisurely pace through customary red herrings and false leads and incidents rich in detail that evoke the spirit of 1920s Victoria. But, like Phryne’s beloved Hispano-Suiza motor car, the story soon accelerates towards the conclusion.

As with all well-established series, new readers will miss some of the back story if this is their introduction to Phryne Fisher, but the narrative style and assurance more than make up for this. For those who are already fans of Phryne Fisher, Dead Man’s Chest is all-round jolly good fun.