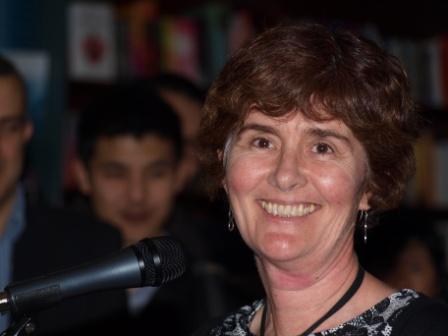 Dead Men Don’t Order Flake by Sisters in Crime member Sue Williams was launched by author Angela Savage, another member, before a large and enthusiastic crowd of family, friends and fans on 7 June at Readings Hawthorn. Here’s what Angela had to say:

If there was a prize for best book title of the year, Dead Men Don’t Order Flake by Sue Williams would surely be the runaway winner.

It was my great pleasure to officially launch Dead Men Don’t Order Flake at Readings in Hawthorn on 7 June 2016. It was a fun event, the wry humour in Sue’s novel spilling over into our Q&A. My launch speech is below. Dead Men Don’t Order Flake is the sequel to Sue’s debut novel, Murder with the Lot, which introduced readers to Cass Tuplin, owner-operator of the best (and indeed only) takeaway in the not-very-fictional town of Rusty Bore in Victoria’s Mallee region. Cass is in her mid-forties, a widowed mother of two adult sons: Dean, the local police constable; and Brad, a uni student and environmentalist. Cass is also an amateur private investigator albeit, as Dean likes to remind her, an unlicensed one.

Murder with the Lot was shortlisted for the 2013 Ned Kelly Award for Best First Book, and if Sue suffered at all from difficult second novel syndrome, it certainly doesn’t show.

Dead Men Don’t Order Flake finds Cass dealing with the return of her old flame, Leo Stone, believed to have died some twenty years earlier, as well as an actual dead person, local journalist Natalie Kellett. Natalie’s father Gary believes the car crash that killed his daughter was no accident, which ultimately puts Cass on a collision course with the chief investigating office in the case, her son, Dean. She’s also fending off the advances of the one-armed Vern – a self-described ‘decent, unattached, asset-rich fella’ – whose general store, alongside Cass’s takeaway, comprises Rusty Bore’s CBD. Meanwhile, Brad’s environmental activism sees him in serious trouble. And speaking of the environment, what was really behind the shelving of plans to build a community solar farm in Rusty Bore? Was Leo’s cousin, Showbag, genuinely convinced that his goats would suffer solar sickness-related headaches if the scheme went ahead?

Dead Men Don’t Order Flake combines a cast of colourful characters – I haven’t even mentioned Madison and her ferrets – and vivid setting, with a pacy plot and laugh out loud humour. As the reviewer at The Saturday Paper says, “one of the novel’s strengths is its affectionate, tongue-in-cheek treatment of its own genre and its distinctly local spin on cosy camp”. Craig Kirchner at Abbey’s Bookseller calls the novel “enormously enjoyable… Quintessentially Australian without being overcooked”.

And in my own search for food-related puns, I’d call Dead Men Don’t Order Flake fresh, crisp and the crime fiction equivalent of the perfect comfort food.

Sue Williams has a PhD in marine biology and has worked as a science writer and chartered accountant. She lives in Melbourne with her husband.

See books that changed me to read about Sue’s eclectic literary influences.