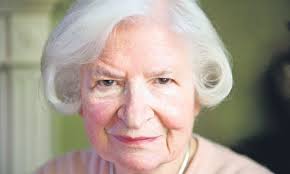 Sisters in Crime Australia mourns the death of British crime queen, P D James, who died at the age of 94 on Thursday (27 November 2014) at her home in Oxford.

James, a public servant, had her first book published at the age of 42 and was best known for her Adam Dalgliesh mysteries which sold millions of books around the world, and were widely adapted for television and film.

However, it is debateable as to whether this statement, published in The Guardian, is entirely accurate:

“With second-wave feminism at high tide, James flirted with a tough, working-class female lead. When Cordelia Gray made her debut in 1972’s An Unsuitable Job for a Woman, she became one of modern crime fiction’s first female private detectives, paving the way for Liza Cody’s Anna Lee and Sara Paretsky’s VI Warshawski.”

For more go to The Guardian feature which includes links to an interview with P D James, a video, a gallery of photos, quotes from James, and an obituary.

Serendipitously, the first episode of the three-part TV adaption of her Jane Austen homage¸ Death Comes to Pemberley, screened at 8.30pm Friday 28 November. Check it out on iView until 6 December.