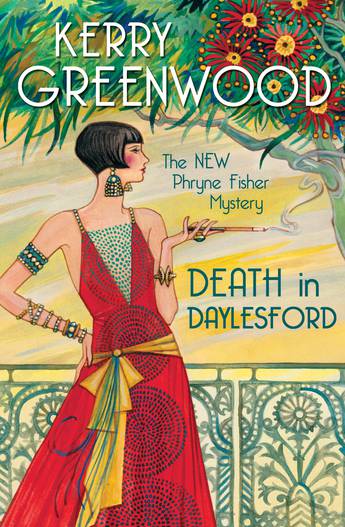 When a mysterious invitation arrives for Miss Phryne Fisher from an unknown Captain Herbert Spencer, Phryne’s curiosity is excited. Spencer runs a retreat in Victoria’s spa country for shell-shocked soldiers of the First World War. It’s a cause after Phryne’s own heart but what could Spencer want from her?

Phryne and the faithful Dot view their spa sojourn as a short holiday but are quickly thrown in the midst of disturbing Highland gatherings, disappearing women, murder and the mystery of the Temperance Hotel.

Meanwhile, Cec, Bert and Tinker find a young woman floating face down in the harbour, dead. Tinker, with Jane and Ruth, Phryne’s resilient adopted daughters, together decide to solve what appears to be a heinous crime.

Disappearances, murder, bombs, booby-traps and strange goings-on land Miss Phryne Fisher right in the middle of her most exciting adventure.

First published in The Weekend Australian 19-20 December 2020 and reproduced with permission.

Stylish sleuth Phryne Fisher was dreamed up in the late 1980s, after Kerry Greenwood, a finalist in the 1988 Australian Vogel’s Literary Award, was offered a publishing deal for two detective novels. Determined that these books should be historical, Greenwood envisaged a 1920s protagonist with some resemblance to Dorothy L. Sayers’s 1930s protagonist Harriet Vane.

Now in 2020 we have Death in Daylesford, the twenty-first novel in this splendidly successful series. Readers new to Greenwood and concerned about historical accuracy can be assured that after all these years of researching 1928-29 Australia her backgrounding is reliable – although, as always, her Phryne pushes social boundaries.

Much of the pleasure of this series for devoted women readers is the wish-fulfilment provided by Phryne’s attributes and attitudes. She’s beautiful, sensuous, wealthy, and independent. To boot she puts her advantages to constructive use, chastising the wicked and assisting the good, producing happy endings every time.

Death in Daylesford is a variant of a sub-genre I think of as Spa Noir. It flourishes in the UK, where mysteries designed for holiday entertainment feature trips to sunny and glamorous spa-resorts.

Greenwood’s story begins with Phryne imperiously driving away from St Kilda in her Hispano-Suiza, her holiday destination the Victorian spa town of Hepburn Springs. It’s “a place of quiet refinement” in the mountain forest, according to Phryne’s lover, Lin Chung. Nearby Daylesford is “more boisterous”.

Inevitably, this health-giving sanctuary presents challenges. A handsome former army captain caring for shell-shock sufferers requires Phryne’s benevolence, not least in the bedroom. There are reports of rural women disappearing. And a growing number of audacious murders of eligible young men calls for Phryne’s proactive attention. Meanwhile, back in the city, the younger members of Phryne’s unorthodox household are investigating a death, their exploits echoing those of British and European child detectives in the Golden Age of Detective Fiction.

For readers not enamoured of Phryne, pleasure may be found in Greenwood’s beguiling use of language and cultural allusions. The narrating voice and Phryne’s dialogue are arch, witty, opinionated, and rarely perfunctory. Superlatives and capitalisation abound. Old-fashioned poetry is quoted. There are traces of classical myth and Shakespearean comedy. The forest is magical, its birdsong enchanting, and a slew of loving couplings has been affirmed by the end.