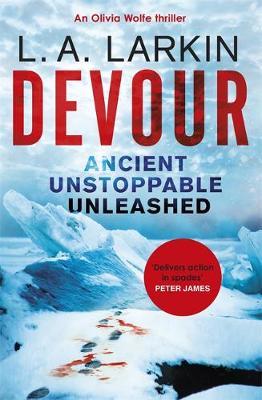 Their greatest fear was contaminating an ancient Antarctic lake, buried beneath the ice for millions of years. They little knew the catastrophe they were about to unleash.

Welcome to the high octane world of Olivia Wolfe.

As an investigative journalist, Wolfe lives her life in constant peril. Hunted by numerous enemies who are seldom what the first seem, she must unravel a complex web of lies to uncover an even more terrifying truth.

From the poppy palaces of Afghanistan and Antarctica’s forbidding wind-swept ice sheets, to a top-secret military base in the Nevada desert, Wolfe’s journey will ultimately lead her to a man who would obliterate civilisation. She must make an impossible choice: save a life – or prevent the death of millions.

At first I was confused by the number of Antarctic expeditioners and had trouble distinguishing them. Olivia Wolfe is a feisty journalist with a conscience, addicted to warzones & challenging personalities.

I was attracted to the Antarctic setting but much of the action is in other countries, and each reveal the author’s eye for detail. Impressive plot twists. Evidence of thorough research into police and espionage procedures, let alone security for the President’s family.

Olivia always seems to be on the run and in physical danger. Rarely suffers from bruises or fatigue despite lots of fighting. But I really liked the way L.A. Larkin provided intelligent solutions, like leaving information in a Dropbox with new password, while on the run.

The first person viewpoint of the stalker seemed a little contrived as it did provide plot links.

Later, the Russian became an enigmatic, fascinating character, her match.

This book is definitely filmic and I’d willingly read more of Olivia. Wonderful to find a resourceful and highly skilled female sleuth operating internationally. And to have strong secondary characters who have full story potential.