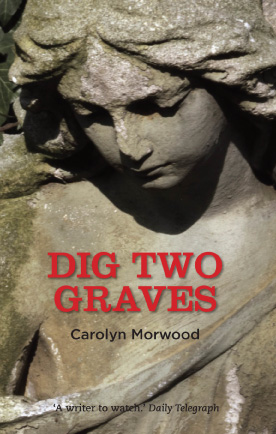 Six international artists are invited to a residency in southern Spain.
One falls in lust. Two fall in love.
One talks only about New York.
One makes installations out of feathers and stones.
And one is left for dead on the side of a mountain.

The setting for this book, an artists’ residency in Spain, will pique the interest of many readers. Who hasn’t daydreamed of taking off to somewhere exotic to concentrate on some form of art, craft or hobby? Dig Two Graves sees Carolyn Morwood gather six people together to do just that.  Secluded for an entire month in a gracious residence in southern Spain, two New Yorkers, two Sydneysiders, one Brit and one Spaniard spend time enjoying the use of individual studios whilst also being wined and dined, allowing them to concentrate on nothing but their work, and each other. As one of the blurbs for this book asks, “What can go wrong?”

Well the answer is “plenty” if you’re the one who’s left for dead inside the crater of a nearby mountain, or the one who can’t express their love for a fellow artist, or the one shocked into facing the basest elements of their nature. Dig Two Graves starts off kind of slowly, setting the scene for life in the residency and establishing the emerging relationships or camps amongst the six artists. The people who run and care for the place play a role in the story but mostly they provide practical fuel in terms of moving the plot forwards.

One gets the feeling Morwood has either been a guest at such an artsy haven or mined talented friends for insights. There’s a pleasingly jaded air to the descriptions of the six key players, particularly from Silvia, the woman in charge of the residency. She separates attendees into three categories: princesses, the needy and the independent souls.

Rose, a painter from Sydney who comes coiffured and ready to find someone to bed along with something to paint, immediately sets her sights on the Spanish sculptor, Alfredo. He is a romantic widower we later discover falls (no pun intended) squarely into the needy category. They become a lusty item while the English novelist, Mike, and the Sydney photographer, Jane, strike up a frustrating relationship stifled by his shyness and her caginess.

It’s not until about chapter 14 that the pace really picks up. Before that Morwood paints a pragmatic picture of residency life – New Yorkers who spend too much time talking about New York, sunlight in the Spanish winter, Mike’s drab wardrobe. The thing that really comes to bear is the way art seems to genuinely dominate the mind-set of those who have taken it up professionally, no matter the discipline. The residency is designed for people with credentials and documented achievements, that much is clear. Time and time again we see examples of the artist putting their work before people, emotions or situations. At one point, for instance, we learn Jane once took a photo of her husband just before he came into their house to ask for a divorce. She wanted to record that particular emotion on his face.

There is some lovely language in this book but Morwood never over-eggs the pudding. She’s the mistress of the three-word pattern. “Bereft. Frightened. Alone” describes how Alfredo felt after losing his beloved wife , while “Supplication, defiance, defeat” are the qualities Jane captures in the face of one of her subjects.

When the tension does ratchet up, after one artist is left for dead and one chooses to escape the scene, Morwood displays her real skills. Sentences become clipped and guilty thoughts are expressed succinctly. In a scene where the fleeing artist moves through airport customs, her thoughts and emotions compared to those of a drug smuggler, it’s easy to imagine yourself under that strain. “Officials all around, watching faces and assessing luggage, trained for signs of nerves … Keep your eyes on your things and look bored.”

The story soon shifts to one of guilt and revenge, always favourite topics for crime readers, but the pace slows again, reducing some of the impact, especially compared with the strong central section. The points of view shift quickly and repeatedly. Perhaps this is the influence of modern television dramas where focus shifts on a knifepoint. When reading it can cause a little whiplash or result in lack of depth.

Dig Two Graves is a book populated by unlikeable characters. None of the artists inspire much affection. They’re all a little myopic and self-obsessed.  Some readers might find them hard to care about or stick with. That aside, Morwood does a great job of throwing a couple of her key characters into the roles of guilt-ridden fugitive and calculating vigilante. It’s always fun to put yourselves in the shoes of an everyday person who is forced to create disguises, dodge authorities, live without official identification or meditate on murder. Isn’t it one of the reasons we love crime fiction?