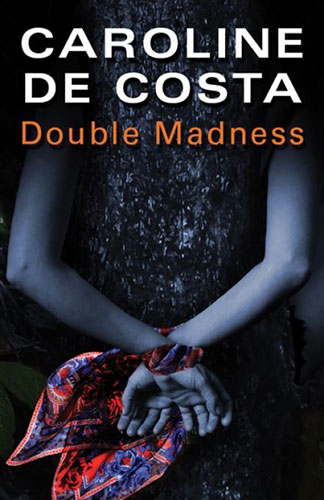 As local residents and authorities in Far North Queensland assess the damage in the aftermath of Cyclone Yasi, a woman’s body is found in bizarre circumstances deep in the rainforest.

One of the joys I find in crime fiction is the sense of place, descriptions that evoke a feeling of being there and of understanding the landscape and its interaction with the story. This is the case in “Double Madness” the first crime novel of Caroline De Costa. The place is Cairns, Queensland, where De Costa is a Professor of Medicine at James Cook University.

The story begins in 2011. A chance decision to take a shortcut for the view, that leaves the car stranded in a creek …. “That was when they noticed it. The smell. Chris was the first to turn her head towards the bushes at the side of the road.

Tim knew the smell. You didn’t forget it. He’d talked to pathologists he’d worked with about the smell and they all had the same reaction: morose recognition. “ What they had discovered was the body of Odile Janvier tied to a tree. No one matching Javier’s description had been reported missing so the identification of the body is an interesting part of the mystery. In charge of the investigation is Detective Senior Constable Cass Diamond.

The story unfolds as the husband of Odile is also missing, two sons who are not on the scene and the relationship that Janvier had with many members of the Cairns medical profession comes to light.

De Costa’s draws on her medical experience throughout the novel showing an ability to keep the readers informed without going into mind numbing detail.

Her knowledge of Cairns and its surrounds is a feature the aftermath of Cyclone Yasi that is easily imagined to Cass Diamond contemplating the view from her desk next to the window. “But Cass’s view was of her own personal fairy tale mountains, often mysteriously wreathed in cloud, framed within the window space like the pages of a picture book”.

The plot is complex but generally De Costs handles it well though there was a time when I wondered about the relevance of some characters. Another joy in Double Madness is the character, Cass Diamond. It was so refreshing to read of an indigenous character who is depicted as part of society firstly rather than a total focus on her background. She is a wonderful character, funny intelligent and that determination to follow the leads as she sees them rather than being bound by the book.