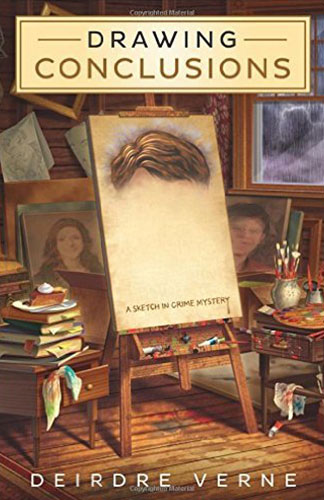 Cece Prentice is a most unusual young woman. Heiress to a large fortune thanks to her doctor father, who is the head of a genome company on Long Island, Cece is also a freegan–ecologically-minded and socially conscious. If that happens to include dumpster diving for half an old hamburger, previously started by someone she has never met, then so be it.

Cece would still be going about her ordinary, albeit weird, life had her beloved twin brother Teddy not been murdered. Drawn into the police investigation, CeCe uses her sketching abilities and knowledge of her father’s company to provide Detective DeRosa with the clues he needs to ferret out what happened to Teddy. But she soon realizes that this mystery is much more complicated than she ever imagined.

Congratulations to New York Sister in Crime Deidre Verne for authoring the first novel in a projected series, the Sketch in Crime Mysteries. Verne’s protagonist is 28-year-old portraitist CeCe Prentice, who lives in a big old inherited house on Long Island with a group of like-minded friends. Readers familiar with the set up in Sulari Gentill’s Rowland Sinclair series should feel quite at home. However there are a couple of significant differences. While Rowly and his artistic housemates live comfortably thanks to the Sinclair pastoral fortune, CeCe and her pals live frugally without any of the funds generated by CeCe’s father’s world-renowned genetics research laboratories; indeed, they are so conscientiously anti-consumerist that they supplement what they can’t grow by living as freegans, scavenging from dumpsters. And while Rowly and Edna remain not-quite lovers, CeCe has little hesitation in having casual, comforting sex with one of her housemates, Charlie.

Predictably, the nefarious doings which turn CeCe into an amateur detective are happening in the competitive capitalist world of obtaining and exploiting genetic findings. When her twin brother, Teddy, who works in the laboratories, is found dead, ‘cause undetermined’, CeCe can no longer remain disdainfully detached from the family enterprise. Threats to her life then draw her further in, until she’s working side by side with an appealingly husky detective of her own age, Frank DeRosa.

Blackmail, assault, murder, suicide, secret data, unethical research methods and menacing foreigners: Verne works with the standard components of a commercial and scientific crime plot-line. What adds novelty is, first, the usefulness of CeCe’s skill in observing and drawing faces and, second, the relevance of genetics research to CeCe’s own circle of relatives, friends and new-found enemies. CeCe’s sense of who she is somersaults toward the end of the story as Verne lets loose some very personal revelations.

It’s all good likeable fun: sometimes witty, lightly erudite, and openly contrived. Unfortunately the novel’s packaging does it no favours. At first I feared I was beginning on an inept, self-published first book. However Verne turned out to be a capable story-teller with a light touch. I’d have no objection to accompanying CeCe and DeRosa into another mystery.