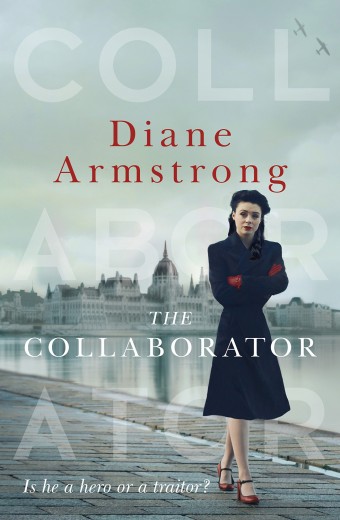 Sydney-based Sisters in Crime, Diane Armstrong, is a child Holocaust survivor who was born in Poland in 1939 and arrived in Australia in 1948. An award-winning journalist and bestselling author, she has written six books. Her family memoir Mosaic: A Chronicle of Five Generations was short-listed for the Victorian Premier’s Literary Award for Non-Fiction as well as for the National Biography Award. In 2000, The Voyage of Their Lifewas shortlisted in the NSW Premier’s Literary Awards. Her first novel Winter Journey was shortlisted for the Commonwealth Writers’ Literary Award. Her second novel Nocturne won the Women Writers’ Society Fiction Award. Empire Day, a novel set in post-war Sydney, was published in 2011.

The Collaborator features  an act of heroism, the taint of collaboration, a doomed love affair, and an Australian woman who travels across the world to discover the truth…

Based on a true story set in Hungary during World War II, it explores the moral complexities and tragic consequences of a daring act by a Jewish journalist who dares to confront Adolf Eichmann to rescue over 1500 Hungarian Jews from the camps.