Like many of us, Sydney author, Natalie Conyer,  has been watching a lot of TV crime during the pandemic and it has prompted her to reflect on the wonderful women appearing in supporting roles.

When it comes to women in TV crime, we’re spoilt for choice. From Vera to Veronica Mars, female leads shine.

But what about women in supporting roles? Lately, I’ve been enjoying fabulous female characters (and acting) in smaller roles, and some of them steal the show. Here are five different but unmissable TV series featuring outstanding female support:

This spy series has been hailed as one of the world’s best thrillers, and the hailers are right. It’s up there with the greats.

Apparently based on real-life research, Le Bureau is as much about office politics as spy goings-on. At its centre is the French agent known as ‘Malotru’ (Mathieu Kassovitz). We follow him and his fellow agents at work and in the world’s trouble spots as they head off conflicts, have affairs, and rise and fall in the organisation’s hierarchy.

The women here aren’t so much supporters as equal partners. 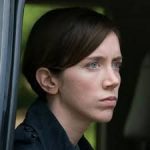 Marina Loiseau (Sara Giraudeau, pictured), a young and brilliant agent, goes from being a novice to a weary survivor. Marie-Jeanne Duthilleul (Florence Loiret Caille, pictured), is older and wiser. She starts off as Malotru’s handler but her career – at work and in the field – takes some surprising turns. Both are rounded, unforgettable characters.

If you haven’t yet seen Le Bureau, you’re in for a treat.

Anyone not yet seen this deliciously black comedy-drama? While opinions are divided on the final season, everyone agrees the two women at the heart of this show, Eve Polastri (Sandra Oh) and her love-hate interest Villanelle (Jodie Comer) are the freshest characters to grace the screen in a long time.

So are the second-line players, especially two female standouts, both played by top-drawer British actresses having the time of their lives. 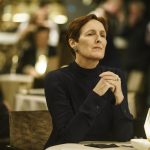 The first is Carolyn Martens (the great Fiona Shaw, pictured), head of the Russia section at MI6. A conservative looking martinet with a louche streak, she’s an unflappable force at work and at home, unravelling slowly as the series progresses. A second, smaller role features Dasha (Dame Harriet Walter), a hard-bitten, one-time Olympic gymnast turned spy, and Villanelle’s former trainer.

Though Carolyn Martens and Dasha never face off against each other, they are equal in age and force of will. It’s a delight to see two older women who aren’t Botoxed up to their eyeballs play characters who take no prisoners.

Better Call Saul, a prequel to Breaking Bad, is a fabulous slow burn of a series. (Note: you need to see Breaking Bad before watching it.)

Saul centres on Saul Goodman, the lawyer in Breaking Bad. It chronicles his shift in name and career from mailboy Jimmy McGill to Saul Goodman (S’all Good, Man) flim-flam counsel to the cartels. 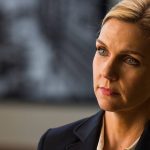 In Breaking Bad, Jimmy/Saul doesn’t have a love-interest. In Better Call Saul, his girlfriend and later wife Kim Wexler (Rhea Seehorn, pictured), is a main supporting character. She’s a brilliant lawyer, a good girl with a tight pony tail who seems to play by the book. But she’s capable of surprising, seemingly uncharacteristic breakouts, from joining Saul in conning someone at a bar to hurling beer bottles over a balcony at night. We’re never quite sure of Kim, and that’s why, at the end of season 5, our hearts are in our mouths wondering how she’ll depart Saul’s life.

How noir can you go? Babylon Berlin gives us Germany after World War I. It’s the Weimar Republic, so we get our quota of debauched nightclubbery. We also get a city suffering post war trauma and poverty, plots and coups and political battles galore. The show’s great, worth seeing for its production values alone. It’s the most expensive non-English language production ever. For example, take a look at this nightclub scene. 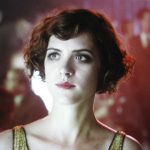 I’m cheating a bit here. The character Charlotte Ritter (Liv Lisa Fries, pictured) is more of a co-lead than a supporting player, but she’s just a couple of degrees less central than the show’s main focus, Gereon Rath (Volker Bruch), so I’m including her. She’s a wonderful character. She’s part flapper, part prostitute and part police clerk, with ambitions to become the first female homicide detective in the Berlin police. Fries plays Charlotte as a survivor, by turns sexy, tough, and tender. You won’t be able to take your eyes off her.

Trailer: (the trailer’s in English but I urge you to watch the subtitled version)

You can’t have a list like this without including at least one grumpy British whodunit. I’m nominating Shetland not just because of the excellent (and easy on the eye) Douglas Henshall, who plays Detective Jimmy Perez, or the craggy island scenery (where people wear pea-coats even in midsummer), or the strong plots. 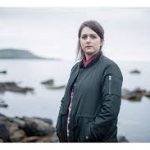 O’Donnell) is one of the great supporting roles and shows how well modern British crime drama reflects real life.

Tosh is understated. She doesn’t have many overt idiosyncrasies. She’s a sturdy, smart, supportive, ordinary person, with ordinary strengths and weaknesses. She’s just doing her job. We get insight into her life, but we come away feeling she could be any one of us. She looks ordinary too: there’s none of the Barbie Doll element common to American shows. She must be a very difficult character to play, and Alison O’Donnell does the job perfectly.

Who would you nominate as a fabulous female supporting character? Let us know HERE.