This I Would Kill For 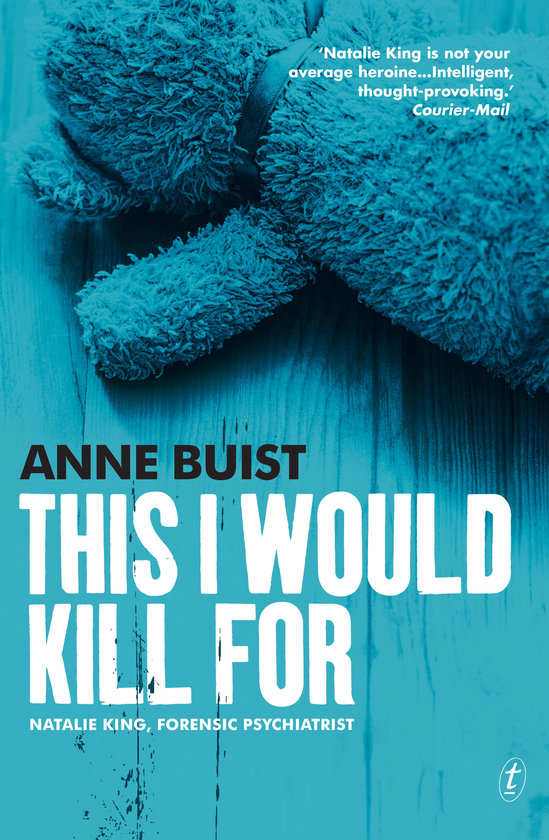 Natalie King has been hired to do a psychiatric evaluation for the children’s court. A custody dispute. Not her usual territory, but now that she’s pregnant she’s happy to do a simple consult.

Turns out Jenna and Malik’s break-up is anything but simple. He claims she’s crazy and compulsive; she claims he’s been abusing their daughter Chelsea.

But what if all the claims are true? Or none? How can Natalie protect the child? And how does she work out where her concerns for Chelsea slide into her growing obsession with her own lost father?

More urgently: with both parents saying they’re desperate to keep their daughter safe—what if one of them is desperate enough to kill?

Nowadays I rarely read the Bible, but Anne Buist’s third book in the psychiatrist Natalie King series This I Would Kill For sent me digging out my battered King James version to refresh my memory of King Solomon. When two women appear before Solomon, both claiming to be mother of an infant, he calls for a sword. ‘Divide the living child in two, and give half to one and half to the other.’ The first woman begs to spare the child’s life and forfeits her claim. The other says, ‘Let it be neither thine nor mine, but divide it.’ Solomon, in his wisdom, determines the first woman to be the child’s mother.

In This I Would Kill For, Natalie King, motorbike-riding, rock-singing psychiatrist is called as an expert witness in a custody battle between Malik and Jenna Essa. Malik is father to three-year-old Chris and step-father to Jenna’s eight-year-old daughter, Chelsea. Jenna will do anything to retain custody of her children. But will she go so far as to commit perjury? And is the good-looking Malik really a psychopathic ‘fox in the henhouse’ or dedicated to the children’s welfare? It’s up to Natalie to present the facts to the court.

When Chelsea’s behaviour points to potential abuse, the custody battle turns savage. Jenna is sure Malik is the abuser while Malik hints Jenna is an unfit mother. Does Natalie King possess the wisdom of Solomon to determine which parent is lying? If she doesn’t get it right – Chelsea will be handed over to a potential abuser or be denied the love of a step-father genuinely concerned for her welfare. Natalie King is a complex character with her own problems. Her recent pregnancy (paternity unsure) and her growing preoccupation with the identity of her own father may be clouding her judgment. But she must make choices. Does she go with her gut instincts, to the peril of her career, her lover or her own life?

Buist, a psychiatrist and Chair of Women’s Mental Health at the University of Melbourne with experience in protective services and the legal system, paints an accurate and compelling portrait of parents at loggerheads over their children, unwilling to give an inch, a position reflected in Natalie’s lover Liam’s own marriage. There are intriguing threads throughout the novel and it is unclear who is the abuser, particularly with a few tantalising red herrings sprinkled throughout. The court scenes are compelling and I felt as if I was present, watching the volleying of evidence and opinion. The novel provides an interesting insight into the challenges facing psychiatrists, social workers and judges – who forced to make tough decisions are often vilified by the media.

Buist examines the rigid opinions voiced in mainstream and social media (both left and right, cultural and religious). She muses as to whether child welfare is being sacrificed on the altar of political correctness.

Five out of five stars for this intelligent and thought-provoking book. It is multi-layered, intelligent writing – a novel in which to sink your teeth and have you question people’s motivations. I read it in two sittings (only because I needed sleep). Good luck to Natalie and her unborn child (the bean) – I loved that name, a little character already – I look forward to their adventures in the next novel.