Getting iced with L A Larkin 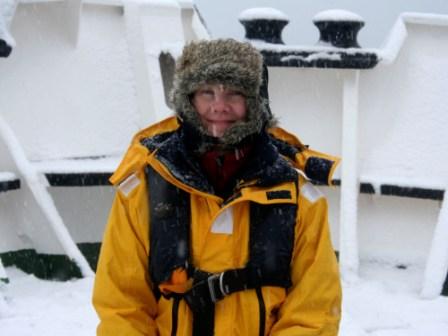 Hello, L A and thanks for taking our questions. First, let’s get oriented with some “when and where” information. Then we can look at some of your marvellously diverse characters.

Your novel’s cover shows blood on the snow in an icy blue environment. The title, Devour, is in huge red letters. Readers are likely to feel some anticipatory shivers. Not everything in your plot happens near the South Pole, yet I think it’s fair to classify your book as ‘Antarctic noir’ or ‘Antarctic thriller’. Your thoughts?

Everything that happens in Devour springs from events in Antarctica early on in the book and that is the main reason why the cover suggests menace in Antarctica. As Jennifer Byrne said on the ABC’s The Book Club as she held up a copy of Devour, “I do like a spine with a bit of gore on it!”

The novel’s action seems to be happening a few years in the future. You mention events that haven’t happened (so far as I know) but conceivably might happen one day. For instance, we learn that two years earlier six Australians and one Finnish man were butchered by mercenaries in Antarctica. Do you want to say anything about your timing considerations?

The book is set in the present day. Devour is inspired by real events in Antarctica. In December 2012, a British team led by Professor Martin Siegert attempted, and sadly failed, to drill down through three kilometres of ice to reach the subterranean Lake Ellsworth. They believed that in that lake, cut off from the rest of the world for centuries, existing in total darkness, they would find life, never before seen. Details such as the hot water drill and the camp layout are based on details Professor Siegert kindly shared with me. Likewise, the HMS Queen Elizabeth, Porton Down in the UK, and Creech Airforce Base in the USA are all real. One of the joys of being a fiction author is that I can take what is real and wreak havoc!

The event you refer to in your question is a reference in Devour to my previous Antarctic thriller, Thirst, in which Luke Searle faces a band of mercenaries about to cause a global catastrophe.

The competitive outdoor scientific activity in Antarctica has to be conducted in the Southern Hemisphere summer. This means that when investigative journalist Olivia Wolfe flies back to England after a brief, intense trip to Antarctica, she is returning to wintry weather. For you as author, how was it choreographing a high-velocity narrative in cold, windy, snowy conditions in both hemispheres?

As an author I try to bring to life the different environments Wolfe finds herself in. The sub-zero and fast-changing climate of Antarctica, with its terrifying blizzards, is very different to the December chill in Kabul, or a winter’s day in England, or the chilly, dry climate of Indian Springs, Nevada.

A catastrophe occurs on a war ship in the Atlantic Ocean. Writing this kind of scenario requires a bold attitude and an expansive outlook. Are you a brave writer?

I don’t know if I am a brave writer, but I thoroughly research my stories, which includes getting to know the layout of the UK’s newest and largest aircraft carrier, the HMS Queen Elizabeth. Action and conspiracy thrillers are all about big threats and potential disasters, the higher the stakes, the better. My readers expect nail-biting intrigue and I do my best to deliver it.

Olivia’s trajectory takes her to the USA. There the climax of the storyline endangers high-ranking individuals, poses a monstrous threat, and plays out in a spectacular location. How early in your plotting did you envisage this climactic scene?

The climax in Nevada was planned from the beginning. I find it is important to know where the climax will take place and how it will pan out so I can plot the rest of the story.

Olivia’s investigations have more than once put a price on her head and forced her into contact with DCI Dan Casburn of Counter Terrorism Command. Casburn belongs to the school of tough-guy, SAS-trained law enforcement. He “has enough stubble on his chin to sand back the peeling paintwork on Wolfe’s windowsills”. Moz Cohen, Olivia’s scowling editor at The Post, is another abrasive man in authority. When Olivia is on the run, wanted for murder, Cohen is prepared to sack her: “a killer on the payroll isn’t good for business”. Does it assist your story-telling if Olivia has to contend with abrasive people in authority?

I wouldn’t say Devour is about Wolfe coming into contact with abrasive people. I do believe, however, that what drives a good thriller is conflict, both internal conflict, such as self-doubt, and external conflict, which includes people like Casburn. DCI Casburn uses his physical presence to try and intimidate her. He will do whatever it takes to stop a terrorist act and he believes Wolfe is in his way. Ironically, they are, as Wolfe points out, on the same side: they both want to discover the truth. It is just that their methods are very different and their personalities jar.

Olivia joins forces with Russian defector Vitaly Yushkov. Receiving progressive revelations about Yushkov’s current Afghani and Russian connections, Olivia flip flops between trusting and distrusting him. Together the two have an extraordinary mission to carry through. At the same time they are on the run from the British authorities and international assassins. Was it tricky to keep track of all these shifts in allegiances, threats, identities?

Devour has a very intricate plot, as well as a subplot in the form of the stalker. It is full of plot twists and surprise revelations. Many characters in Devour are not what they at first seem and to keep track of them I had to note down what had been revealed in each chapter. I strive to make each book I write better than the last, and Devour was a big challenge because it presents Wolfe with numerous potential enemies. I have also striven to give characters light and shade, because nobody is all good or all bad. Even Wolfe has a dark past.

Olivia’s best friend and ally is a retired police superintendent, Jerry Butcher. After Olivia survives another of her many near-death encounters, he reflects on “how deeply he loves every rebellious, impulsive, adventurous, argumentative bit of her”. Am I right in guessing Olivia will be grateful for Jerry’s support during her next adventure?

Some of the key supporting characters from Devour will also appear in Prey, which is next book in the Olivia Wolfe thriller series. I’d rather keep you guessing as to which ones!

I’m afraid the answer has to be, wait and see. But I will say that the next book is set mainly in South Africa.

Final question. You reference Dr Who a couple of times. You’re a fan?

Thanks so much for your answers, L A.

L A Larkin will join Ann Turner to talk to Hazel Edwards about their Antarctic thrillers at 8pm Friday 7 October at an event entitled, Antarctic Noir: The Ice Women Cometh!