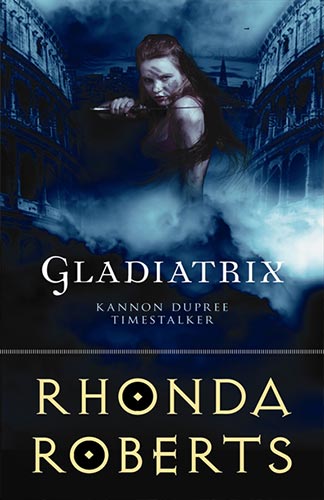 Review by Robbie Hutchins
I had really high expectations after reading the synopsis on the back of this book. I imagined it would contain aspects of time travel similar to Dr Who, combined with the raw power and energy of the movie Gladiator. I was not disappointed.
From the first page, I was completely immersed in Kannon’s world. The style is clever, in that you learn about the feisty, tough and intelligent heroine through active dialogue, and discover more as she pursues her own identity by seeking out her biological mother. Initially named Kannon Jarratt — using the surname of the woman who discovered her as an infant, fostered and raised her—my only disappointment was the spoiler on the front cover: “Kannon Dupree: Timestalker”, which erased the potential question of whether Time Marshall, Victoria Dupree, was in fact her mother.
That aside, there was plenty of crime, action, suspense, and a little romance throughout the novel which meant there weren’t any dull, unnecessary chapters. The writing is tight and riveting. I devoured this longer-than-usual book in only a couple of working days as I kept finding excuses to just squeeze in a few more pages.
The book is written in three parts. The first part, set in the present, affords the opportunity to understand Kannon’s background and personality. When Kannon inadvertently follows Victoria back to ancient Rome we enter the second part. Finally all is resolved in the third part, which returns to the present.
As well as Kannon and Victoria, there are a number of well-developed core and secondary characters who support Kannon in her quest, and of course the necessary bad and evil characters who try to thwart her. My favourite support character was the dark and smoldering Alexander. He’s the strong, silent type, with his own agenda and, despite a somewhat hostile beginning, he and Kannon forge a memorable bond.
Kannon’s time in Rome in the year 8 AD ads another exciting “character to the story. A foreign country and culture both adds to Kannon’s challenges and provides an exotic backdrop to the developing story. In addition there is the introduction of the Isiac Religion, providing both a modern science fiction element to the story and links to ancient Egyptian culture. The plot has been carefully developed and the relevant historical facts researched carefully.
When a tale contains so many elements and combines futuristic and historical aspects entwined in a complex mystery/suspense crime, it would be easy to let the story digress or drown in the intricacies. Rhonda Roberts handles all of these aspects with instinctive ease. I eagerly await Kannon’s future time-travelling adventures.

Review by Sue Namkervis
The introduction to our heroine, Kannon Jarratt, in the opening sequence of ‘Gladiatrix’ is terrific. The 22 year old Aikido (martial arts) instructor starts a lesson with a batch of new police recruits, only to realise that her bete noir from school days is in the group, and is setting her up for a fight to settle old scores from years ago. Kannon is in turn dismayed, vulnerable, determined, skilled, disciplined and clever as she gives him his come-uppance, all qualities displayed again and again throughout the book. This fight scene is the first of many throughout the book, but you don’t choose to read something titled ‘Gladiatrix’ without expecting some fighting!
After this promising beginning, there is an irritatingly laborious section of background setting. At 580 pages, this book is too long, and this is one lengthy section that could have benefitted from better editing. However, the pace then picks up, and once Kannon is on a plane to America, to meet up with the Time Marshall, Victoria Dupree, who she suspects may be her mother, the story fairly gallops along.
Roberts handles the fantasy element well. Time Travel was developed at about the same time as space travel, and is managed by an organisation, National Time Administration (NTA), not unlike NASA. There are other similarities; time travel is not for everyone. With only a handful of Time Marshalls, the missions to the past are tightly controlled, to investigate weighty matters in American policy interests. The technology is practical and believable, and the whole concept approached in such a matter-of-fact way that the reader is happy to accept this is what it is.
Victoria is currently on a mission to Imperial Rome in 8AD, investigating the origins of a religion that is currently in conflict with Christianity in the US. However, something has gone wrong at the Roman end, and she doesn’t return when expected. In an attack on the NTA facility where Kannon is waiting for her, Kannon finds herself in the time transporter and dropped (literally) into ancient Rome. She is fortuitously equipped with the tools she needs for translation and location, and sets off on her big adventure.
The mood of the book swings around in a slightly disconcerting way. As Kannon lurches from implausible to improbable crisis after crisis, it feels like a light-hearted romp through colloquial Rome, and I often laughed out loud. But then there are episodes of great darkness. Imperial Rome was a society choking on the stench of its own decay. ‘Gladiatrix’ is set in the milieu of the Arena, politics and religion, and there are thus graphic descriptions of violence, bloodshed, mass murder, cruelty and depravity of the worst kind. Reading some pages made me feel besmirched. The only redeeming feature was Kannon’s revulsion to these events, and her determination to set things right when she could.
There were heroes and villains on both sides of the time transporter, and many surprises as the mysteries unfold and are resolved. At the end, Kannon is poised for more time travel adventures.
There is some very powerful writing in this book. The descriptions of the mountains in Australia are beautiful and evocative, and Roberts captures the sensations of a trapped claustrophobe to perfection. She chose to set this book in Imperial Rome, and thus was obliged to touch on some of its darker side, and the word pictures created were crisply and distressingly clear.
People make choices about what they might like to read. If ‘cosy murders’ are your preference, ‘Gladiatrix’ is not for you. But I think there is a market for a strong, action-based female protagonist in an historical fantasy thriller. This is Roberts’ first foray into fiction, and while there are some clunky plot contrivances, it also has a number of promising strengths, including the kind of credibility which comes from her background as a social historian. The factual context of the story has a distinct ring of truth, and spotlights an unpleasant moment in human history. I will follow Kannon’s further adventures with interest. The second book in the series is ‘Hoodwinked’ published in 2011.