Gone: 25 of the World’s Most Chilling and Bizarre Kidnappings by Wendy Lewis 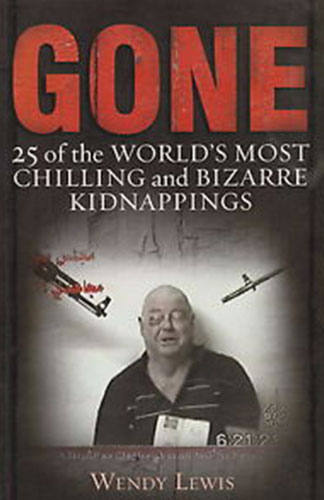 Author: Wendy Lewis
Publisher: Five Mile Press
Copyright Year: 2010
ISBN: ISBN: 978 1 74178 506 7
No of Pages: 247
Review By: Sharon Halasz
Book Synopsis:
This true crime story is written in five parts, each containing five chapters and covering a different kidnapping theme. The first part delves into classic kidnappings such as the abduction of Patty Hearst and the tragic Lindbergh baby story. More child abductions are revealed in the second part, including some shocking Australian cases. Crimes of a political nature come next, ranging from a honey-trapped Israeli whistleblower to Douglas Wood’s kidnapping in Baghdad. Part four includes five hostage situations, some of staggering duration. The book concludes with five strange but true tales, saving the craziest for last.

Chilling and bizarre kidnappings? Oh, yes, indeed. The subtitle sums it up perfectly. I alternated between feeling horrified by evil and gobsmacked by the strange behaviour of some kidnappers. A fascinating read.

Motivations are varied. Money remains popular, particularly crimes involving celebrities and their families. Others are driven by fanaticism, revenge or jealousy. Some kidnappers are harder to comprehend like Josef Fritzl who imprisoned his daughter in the basement for decades. How could he have escaped detection for so long?

School bus kidnappings intrigue me. (I have a sudden urge to re-read Gabrielle Lord’s Fortress, a thriller inspired by the Faraday school kidnapping.) Of all the abductions involving children in this book, these had the happiest resolutions, but I wonder about the long-term psychological outcomes.

After reading about several tragic kidnappings, the last part lightens the mood with a look at the more bizarre side of crime. Fiction writers could never get away with some of these true stories. Imagine pitching the story of a nappy-clad NASA astronaut racing across the country to attack her rival in love.

Overall, I found Wendy Lewis’s book thought-provoking and well-researched. A list of further reading is provided. I recommend GONE to true crime fans. Crime fiction writers will gain insight into the criminal mind and may find inspiration for a fictional kidnapping too.