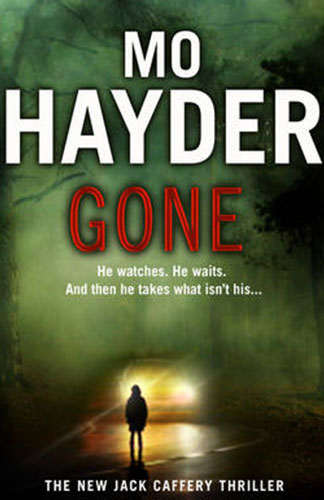 November in the West Country.

Evening is closing in as murder detective Jack Caffery arrives to interview the victim of a car-jacking. He’s dealt with routine car-thefts before, but this one is different. This car was taken by force. And on the back seat was a passenger. An eleven-year-old girl. Who is still missing.

Before long the jacker starts to communicate with the police: ‘It’s started,’ he tells them. ‘And it ain’t going to stop just sudden, is it?’ And Caffery knows that he’d going to do it again. Soon the jacker will choose another car with another child on the back seat.

Caffery’s a good and instinctive cop; the best in the business, some say. But this time he knows something’s badly wrong. Because the jacker seems to be ahead of the police—every step of the way. [emphasis in original]

Bestselling and critically acclaimed, Mo Hayder is another writer highly recommended by the Sisters in Crime whom I hadn’t got around to reading. So I jumped when the chance came to review Gone, her fifth novel in the DI Jack Caffery series.

Hayder’s debut novel in the series was described as a ‘first-class shocker’, while the second, The Treatment, was voted by The Times UK as ‘one of the top ten most scary thrillers ever written’. This combined with rave reviews from peers—Karin Slaughter calls her work ‘Terrifying’; Michael Connelly calls it ‘Haunting’; Harlan Coben ‘Disturbing’—meant I had pretty high expectations of Gone.

So I played hard to get. At first I was, like, ho hum, another police procedural centring on the hunt for a paedophile. But Gone took an unexpected turn, sparking my interest to the point where I couldn’t put the book down. Not only did I nearly miss my tram stop, I kept reading as I walked home, despite the risk of trips and falls.

I took the novel with me on a work trip to Albury and owe big thanks to the taxi driver who let me put the light on in the back seat so I could keep reading on the ride home from the airport.

Part of what makes the book so suspenseful is tension on multiple fronts. There’s workaholic DI Jack Caffery’s desperate search for the jacker-cum-kidnapper. There’s Police Diver Flea (Phoebe) Marley, who in her own search for the children traps herself in a tunnel that is part of a decommissioned transport canal. There are the families of the kidnapped children, trying not to unravel as they wait for news. And there are the children themselves, whose points of view are absent from the narrative but whose fate preoccupies both the characters and readers alike.

I had no problem reading Gone without having read the previous four books in the series. Indeed, it made me keen to read the earlier books for more background on Caffery, and also Flea Marley.

I give Gone full marks for suspense, and also for credibility. Apparently Hayder spends time with several UK police forces and bases her writing on personal encounters with criminals. And it shows.

I’m still deciding how I feel about the ending. While it was moving, I’m not sure it was convincing. But I like that it’s left me with questions.