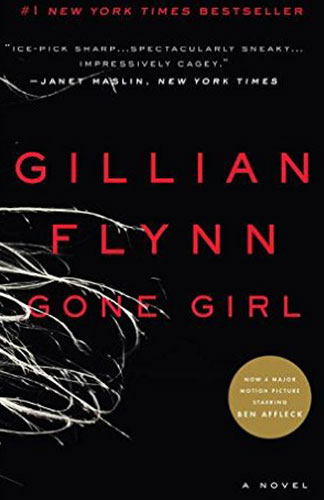 Author: Gillian Flynn
Publisher: Orion Publishing
Copyright Year: 2013
Review By: Michaela Lobb
Book Synopsis:
On a warm summer morning in North Carthage, Missouri, it is Nick and Amy Dunne’s fifth wedding anniversary. Presents are being wrapped and reservations are being made when Nick’s clever and beautiful wife disappears from their rented McMansion on the Mississippi River.
Husband-of-the-Year Nick isn’t doing himself any favors with cringe-worthy daydreams about the slope and shape of his wife’s head, but passages from Amy’s diary reveal the alpha-girl perfectionist could have put anyone dangerously on edge. Under mounting pressure from the police and the media–as well as Amy’s fiercely doting parents–the town golden boy parades an endless series of lies, deceits, and inappropriate behavior. Nick is oddly evasive, and he’s definitely bitter–but is he really a killer?

As the cops close in, every couple in town is soon wondering how well they know the one that they love. With his twin sister, Margo, at his side, Nick stands by his innocence. Trouble is, if Nick didn’t do it, where is that beautiful wife? And what was in that silvery gift box hidden in the back of her bedroom closet?

When I heard that Gone Girl was being made into a movie I knew I wanted to see it and I also knew that I had to read the book first. I hadn’t read the book up until now because of one word – hype. I don’t like or accept mass-insistence that I should read, see, try, buy or do something. And so Gone Girl got put on my “when it all calms down” list and was then forgotten.

I have now read the book and watched the movie and I loved both. Gone Girl has been a rare experience for me where my enjoyment of both versions is complemented by each other and yet at the same time not at all dependent on the other.

When I watched the film there was no one in the world but Rosamund Pike’s Amy but I have found I can re-read the novel now and still love the book version of Amy created in my mind and not at all influenced by Pike’s ‘amazing’ performance.

Pretty rich Amy meets and marries handsome successful Nick and they live happily ever after. Right? Flynn’s plot was never going to be that simple as you discover in the opening pages.

So, Amy and Nick’s marriage falls apart…marriages do all the time, apparently statistically over half fail. But that is not the end of their story either.

The clever structure of Gone Girl allows both Amy and Nick to tell their side of the story in the first person which creates an authority over each of their individual narratives that is continually twisted as each one gets their turn and spins the truth around.

Nick and Amy are both convincing but both are liars, each one trying to make the reader and everyone in their world believe in their better natures, which simply do not exist. So when Amy disappears a competition starts between two: the ‘gone girl’ through her diaries and the ‘of course he did it’ husband through the media, as each plot to win a game of most believable. Only one will win and the stakes are high as Missouri has an active death penalty.

What I enjoyed most about Gone Girl was the breaking of the “good girls win” attitude. Why? Why if it is accepted that good guys finish last do good girls always have to win in books, film and life? Why can’t the Bitch with passion, drive and ambition win for once? Well, here finally she does.

I had moments of tedium in the first half of the novel. Amy was so “nice”, so bland, so “white bread” that I got a bit sick of her and rather indifferent to her fate. I will always be eternally grateful for the second half of Flynn’s book. That Amy, the real Amy, to me she was truly amazing. Not good, far from good, but admirable in a primal way. She set her mind to something and she did it!

Nick was and remains for me more of a cliché of manhood rather than a fully developed character. In his own words (these ones actually proven by events that unfold in the novel) he is a “cheating, weak spined, woman-fearing coward”. I didn’t find Flynn’s portrayal of this man’s inner life to be believable, I found it more what a woman thinks a man’s inner life would be which is something I accuse a lot of male writers of doing in reverse when creating female characters.

But Amy makes Nick interesting and this was another example of Flynn’s gifted talents. She has created a couple who should absolutely stay together and never, ever inflict themselves on anyone else.