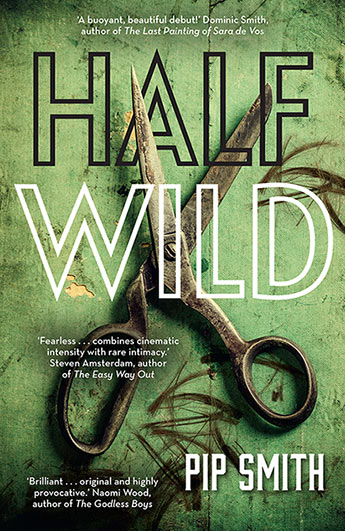 Sydney, 1938.After being hit by a car on Oxford Street, sixty-three-year-old Jean Ford lies in a coma in Sydney Hospital. Doctors talk across her body, nurses jab her in the arm with morphine, detectives arrive to take her fingerprints. She has £100 in her pocket, but no identification. Memories come back to her – a murder trial, a life in prison – but with each prick of the needle her memories begin to shift.

Wellington, 1885.Tally Ho doesn’t need to go to school because she is going to be a fisherman or a cart driver or a butcher boy like Harry Crawford. Wellington is her town and she makes up the rules. Papa takes her fishing, Nonno teaches her how to jump fences on his horse Geronimo – life gallops on the way it should, until a brother, baby William, is born. ‘Go and play with your sisters,’ Papa says, but wearing dresses and sipping tea is not the life for Tally Ho. Taking the advice of her hero, Harry Crawford, she runs away.

Sydney, 1917. The burned body of a woman is discovered on the banks of the Lane Cove River. Was she a mad woman? A drunk who’d accidentally set herself on fire? Nobody knows, until-three years later – a tailor’s apprentice tells police that his mother went missing that same weekend, and that his stepfather, Harry Crawford, is not who he seems to be. Who, then, is he?

Based on the true lives of Eugenia Falleni, Half Wild is Pip Smith’s dazzling debut novel.

The “man-woman case” of 1920s Sydney was a huge scandal at the time, though it seems to have faded almost completely from view (at least, I’d never heard of it). Illiterate drifter Harry Crawford was arrested and charged with the murder of his first wife, Annie Birkett. When it was discovered that he was originally an Italian-New Zealand migrant woman named Eugenia Falleni, people couldn’t get enough of the salacious newspaper reports. Found guilty, released from jail after eleven years because of ill health and encroaching old age,Crawford lived as a woman named Jean Ford until dying in a traffic accident some years later.

Half Wild is a fictional re-imagining of this person’s life. It’s beautifully written, but Pip Smith has made some unusual decisions about her fictional character which, for me, made this at times a difficult read.

Firstly, it is not clear whether the real historical person was a trans man, as we now understand the term. The gender roles and expectations of the early twentieth century were so rigid, there was so much horror at the thought of a “man-woman”, especially one who had married twice as a man and was accused of having murdered his first wife (in addition to attempting to murder his own new-born child and –perhaps – his stepson), that there seems to have been no contemporary accounts of Falleni-Crawford-Ford’s motives for living as a man. And at the time there was certainly no nuanced understanding of the range of circumstances in which someone born female might do that.

Falleni-Crawford-Ford may well have been a trans man as we currently understand it. But Smith’s character is not at all trans. Rather, the story isin the long tradition of women who dressed as men in order to do things they wanted to do in a gendered world – female cabin boys travelling with their sweethearts, female soldiers living a more exciting life than was on offer at home, female doctors following a calling. Not someone who feels male, but someone who doesn’t want the restrictions of traditional female life.

The fictional Nina/Harry doesn’t feel herself to be fundamentally male. Rather, she wears men’s clothing because she doesn’t want to be a wife, mother and housekeeper. But that doesn’t mean that she actively wants to be a man, or feels that she is one, only that she doesn’t want to lead a typical female life. She dresses as a man because she prefers doing what was then thought of as a man’s job; because men’s wages are higher than women’s; and because – as a man – she can pass unnoticed and unmolested in a crowd. Yes, she doesn’t like women (particularly not her two wives and her daughter), but she doesn’t like men either – she really doesn’t like people – and certainly doesn’t seem to identify as male. She barely identifies as human, so deep and generalised is her distaste for other people.

Secondly, Smith has chosen to make her core character deeply unlikeable. It is possible to feel some sympathy for the angry, difficult child Nina, mistreated and misunderstood, and to excuse her bullying and violence as the actions of a child. But it is impossible to like anything about the man Crawford, a nasty, violent, drunken drifter devoid of any capacity for affection or kindness. There are hints towards the end of the novel that the main character has a psychiatric disorder – schizophrenia perhaps – but even so I can’t escape the feeling that Smith actively dislikes her main character, which makes for a disturbing read. It is exceptionally well written, with strong narrative and confident use of multiple perspectives, but it is not an enjoyable read,